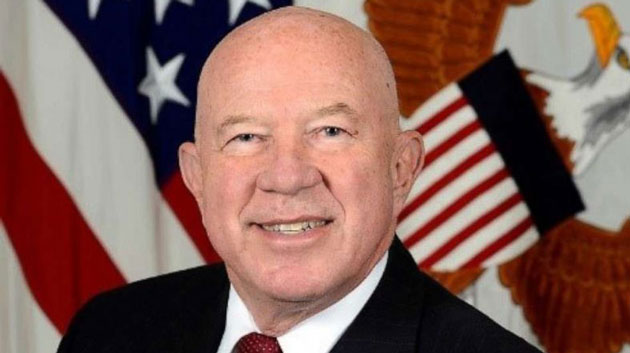 (WASHINGTON) — A top defense official sexually harassed three female staffers before ultimately resigning from his post last April, according to a report from the Pentagon Inspector General’s office released on Thursday.The official, Guy Roberts, was the assistant secretary of defense for nuclear, chemical and biological defense programs — as well as a former Marine Corps infantry officer, judge advocate and staff officer.In the report, the Pentagon IG said it found that Roberts “engaged in a pattern of misconduct in which he sexually harassed women on his staff” to include “deliberate, unwelcomed physical contact of a sexual nature by hugging, kissing, or touching.”He also created a “hostile, intimidating, and offensive work environment for women” on his staff by making “deliberate, repeated, and public comments of a sexual nature to members of his staff in meetings and in a town hall forum,” according to the report.Roberts told the IG he disagreed with the report’s conclusions and that it was not his intent to sexually harass the female employees, but he did acknowledge some jokes he made “were inappropriate.” After taking into account his response to the report, the IG decided it would not alter its conclusions and said it stands by the findings.The investigation into Roberts’ conduct was opened after one of his female employees issued a complaint back in February. During conversations with some of the 18 witnesses interviewed throughout the investigation, the IG identified two other female employees who were also allegedly sexually harassed by Roberts.The first employee said Roberts hugged and kissed her when they were alone, even whispering “I love you” in her ear and touching her thigh during a social event. That employee also said that Roberts invited her on dates for dinner and drinks, made comments to her about him living alone in an apartment without his wife — which she perceived as an invitation to be alone together — and expressed his desire to see her in a bikini.The employee told the IG that she expressed to Roberts numerous times that she found the behavior inappropriate and told him to “stop.”The second and third employees alleged similar unwanted touching — with the second employee saying Roberts routinely commented on her “looks.”Both employees told the IG that they did not report Roberts’ behavior because of concerns that it could damage their reputation or negatively impact their careers.“As a young female growing up in this business, you have to, whether right or wrong … be careful about what you say,” the third employee said, according to the report.Asked about the investigation’s results during a Pentagon briefing on Thursday, chief spokesperson Jonathan Hoffman said he was not aware of the report.According to his Defense Department biography, Roberts was the principal adviser to senior Pentagon leadership on matters concerning nuclear, chemical and biological defense programs, stepping into the role in November 2017.When he abruptly resigned last April, a Pentagon spokesperson declined to provide an explanation for Roberts’s departure in a comment to Foreign Policy.“The department’s commitment to modernizing the department’s nuclear force and closely cooperating with allies and partners remains unwavering, and will result in the increased defense of the nation,” said Lt. Col. Mike Andrews, a department spokesperson. “We appreciate [Roberts’] service to the department and wish him continued success.”Because Roberts has already left his post, the IG said they would give the report to the office of the undersecretary of defense for acquisition and sustainment, for inclusion in Roberts’ personnel file. Copyright © 2019, ABC Audio. All rights reserved.