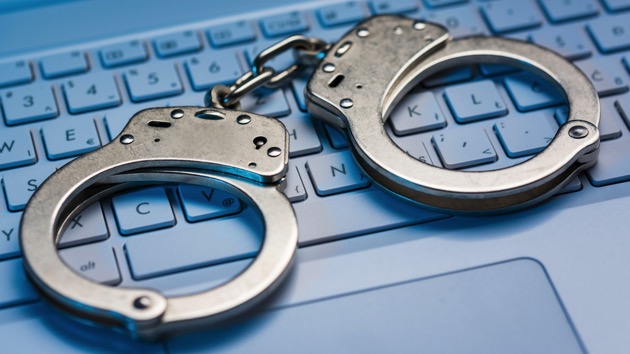 (Los Angeles) — Three people were arrested — and two more remain at large — for involvement in an alleged “high-tech Ponzi scheme” that defrauded $722 million out of investors using the “complex world of cryptocurrency,” according to federal authorities.The alleged scheme includes a trail of evidence indicating they were targeting “dumb” investors and “building this whole model on the backs of idiots,” investigators added.”The indictment describes the defendants’ use of the complex world of cryptocurrency to take advantage of unsuspecting investors,” U.S. Attorney Craig Carpenito said in a Department of Justice statement on Tuesday announcing the arrests.”What they allegedly did amounts to little more than a modern, high-tech Ponzi scheme that defrauded victims of hundreds of millions of dollars,” Carpentino added. “Working with our law enforcement partners here and across the country, we will ensure that these scammers are held to account for their crimes.”Matthew Brent Goettsche, 37, and Jobadiah Sinclair Week, 38, of Colorado, were charged with conspiracy to commit wire fraud and conspiracy to offer and sell unregistered securities. Joseph Franks Abel, 49, of California, also arrested as part of the alleged scheme, was charged with conspiracy to offer and sell unregistered securities.Two other defendants remain at large, authorities said. Their identities are under seal and were not released.The men allegedly lived “lavishly” while running the scheme, which began more than five years ago.The three men arrested “are accused of deploying elaborate tactics to lure thousands of victims with promises of large returns on their investments in a bitcoin mining pool, an advanced method of profiting on cryptocurrency,” Paul Delacourt, the assistant director in charge of the FBI’s Los Angeles Field Office, said in a statement.”The defendants allegedly made hundreds of millions of dollars by continuing to recruit new investors over several years while spending victims’ money lavishly,” Delacourt added.John R. Tafur, the special agent in charge at the IRS Criminal Investigation’s Newark Field Office described their alleged scheme as a “classic con game with a virtual twist.”From April 2014 until this month, the men allegedly ran BitClub Network, which rewarded investors for recruiting new investors and brought in money from them in exchange for shares in the apparent crypto mining pools.Goettsche told the others to target “dumb” investors, who he referred to as “sheep,” authorities said. At one point, he said he was “building this whole model on the backs of idiots,” according the DOJ.In a particularly damning exchange in February 2015, Goettsche told a colleague to “bump up the daily mining earnings starting today by 60%.” His colleague said back: “that is not sustainable, that is ponzi teritori [sic] and fast cash-out ponzi … but sure,” authorities said.Abel and Weeks promoted BitClub Network to investors around the country, law enforcement said. In one promotional video, Abel told investors that BitClub Network was “too big to fail.”In September 2017, Goettsche directed a colleague at BitClub Network to “[d]rop mining earnings significantly starting now,” so that he could “retire RAF!!! (rich as f***).”The men were arrested across the country: Goettsche in Colorado, Weeks in Florida and Abel in California. Their initial court appearances are scheduled in the districts of their arrests, according to authorities.It is not immediately clear if the three arrested have obtained attorneys. Attempts by ABC News to reach them on Wednesday were unsuccessful.The DOJ is encouraging victims of the BitClub Network scheme to come forward at a designated website. Copyright © 2019, ABC Audio. All rights reserved.