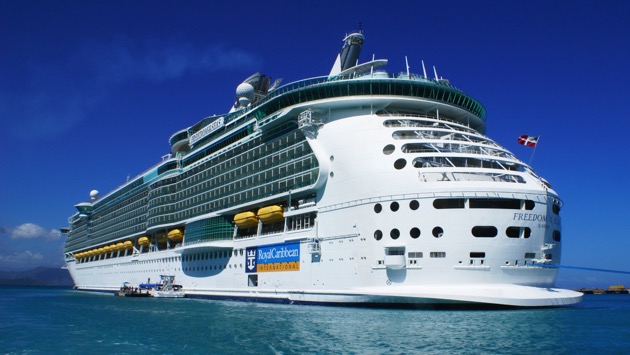 (MIAMI) — The parents of a 1-year-old girl who fell to her death from the window of a Royal Caribbean cruise ship over the summer is now suing the company for negligence.Indiana residents Alan Wiegand and Kimberly Schultz-Wiegand filed the civil lawsuit Wednesday morning, accusing Royal Caribbean of playing “a major role in the death of our child.” Their daughter, Chloe, would have turned 2 this week.”We should be celebrating with presents and a birthday cake, but instead we are talking about her death,” Schultz-Wiegand tearfully said, during a press conference announcing the legal action.ABC News has reached out to the cruise line for comment.The couple was on vacation with their 18-month-old daughter and her grandparents on the Royal Caribbean Freedom of the Seas in July. The little girl was in her grandfather’s arms, sitting on a wooden railing and looking through a wall of glass near the children’s water park area on the vessel’s 11th-floor deck. However, unbeknownst to them, the pane of glass directly in front of them was actually a window slid completely open, according to the complaint, which was filed in federal court in Miami.As Chloe leaned forward to bang on the glass believed to be there, she “slipped” from her grandfather’s arms and fell through the open pane, according to the complaint. The child plunged approximately 150 feet below onto the pier in San Juan, Puerto Rico, where the ship was docked at the time.”There was not a single, adequate indication that this wall of glass panes was not actually a wall of fixed glass panes,” the complaint states, “but instead a wall of glass with glass panes that could actually slide and remain open, as windows.”Chloe’s parents are seeking unspecified damages from Royal Caribbean and are demanding a jury trial. In the lawsuit, they accuse the cruise line of failing to “provide reasonably safe children entertainment areas,” faililng “adequately mark the open windows” and failing to “install safety prevention devices on windows.”The grandfather, Salvatore Anello, has been arrested and charged with negligent homicide in connection with Chloe’s death. He was ultimately released on $80,000 bond and appeared in court in Puerto Rico for a preliminary hearing on Nov. 20.Anello is next due in court on Dec. 17.Chloe’s parents have maintained the cruise line is at fault. Family attorney Michael Winkleman told ABC News that surveillance video of the incident, which prosecutors shared with defense attorneys as discovery evidence last month, supports Anello’s assertion that he thought the window was closed.”These criminal charges are pouring salt on the open wounds of this grieving family,” Winkleman said in an October interview. “Clearly, this was a tragic accident and the family’s singular goal remains for something like this to never happen again. Had the cruise lines simply followed proper safety guidelines for windows, this accident likely would never have happened.”Chloe’s grandfather spoke briefly at Wednesday’s press conference but did not answer questions related to the incident nor the charges filed against him.”I sit here broken. We all sit here broken,” Anello told reporters. “But our family is strong and we will stay strong together.” Copyright © 2019, ABC Audio. All rights reserved.