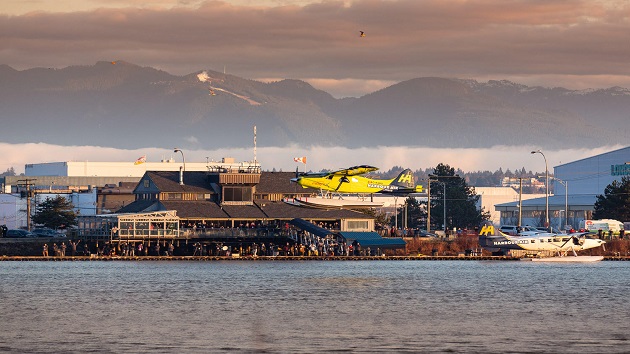 Courtesy of Harbour Air
Posted on December 11, 2019 by ABC News

(VANCOUVER, British Columbia) — Harbour Air, a seaplane company based in Vancouver, completed the first successful test flight of what they claim will be the world’s first all-electric powered commercial airplane on Tuesday.The ePlane, a retrofitted six-passenger DHC-2 de Havilland Beaver, is powered by a 750-horsepower (560 kW) magni500 propulsion system built by Redmond, Washington based electric motor company magniX. The test flight took off from the Fraser River near Vancouver International Airport and lasted about 10 minutes. It was flown by Harbour Air CEO and founder Greg McDougall. “The company is extremely proud to be pioneering this change in aviation,” McDougall told ABC Audio on Wednesday. “We feel that somebody has to lead the way in terms of getting through the regulatory side of it and once we do that a lot of people will be able to follow in our footsteps.” Harbour Air and magniX joined forces 11 months ago for this project after McDougall decided on building an electric powered commercial seaplane fleet. “It was really a natural partnership because they had the technology, they had the will, they had a mandate to get it done by the end of the year,” say’s McDougall. “It took us literally 15 minutes to figure out we were, so to speak, a match made in heaven.”  The propulsion system was first introduced at the Paris Air Show in June. MagniX CEO Roei Ganzarski says seeing the system work is like watching a baby grow. “It was an amazing feeling of seeing the fruits of your labor start,” Ganzarski told ABC Audio. “Now that it’s flown in a commercial aircraft, it’s about how do we cultivate it, how do we grow it, how do we expand it and allow it to have more to happen. The potential for this commercial aviation propulsion system is tremendous and it’s our role to harness that and fulfil it.”The current system allows for a range of 100 miles before the need to be re-charged. Flights can last up to half an hour with a 30 minute re-charge after each flight. The companies said they will now begin the certification and approval process for the propulsion system, which should take two years, before the retrofitting of the remaining aircraft in Harbour Air’s fleet. The goal is to have the fleet flying customers by 2022. Harbour Air was founded in 1982 with two seaplanes as a service to the forest industry. It has grown to 40 seaplanes with more than 300 daily flights to 12 locations, including Seattle, with 500,000 thousand passengers each year. Copyright © 2019, ABC Audio. All rights reserved.