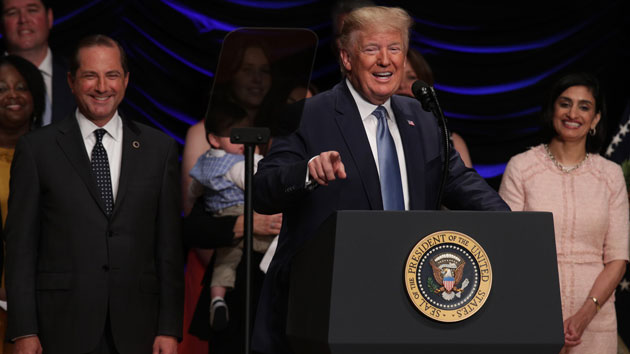 (WASHINGTON) — President Donald Trump’s health secretary and his top Medicare administrator have been summoned to the White House by acting Chief of Staff Mick Mulvaney for a meeting this week after heated tensions between the two high-ranking officials boiled over and a string of embarrassing media leaks, according to several sources familiar with the details.The apparent feud between Health and Human Services Secretary Alex Azar and Seema Verma, the administrator for the Centers for Medicare and Medicaid Services, has become a major distraction for the Trump administration, which has struggled to deliver on its promised overhaul on health care, and it’s raising serious questions about who the president will rely on to carry his message on the topic ahead of the 2020 election.According to one administration source, there’s no plan yet to reshuffle the decks of leadership at HHS. But the meeting led by Mulvaney is akin to being called into the principal’s office in a bid to resolve their long-running dispute that several people say has grown increasingly ugly.The administration source said that Azar and Verma have been told previously, in separate settings, to knock it off. The president, the vice president, and the vice president’s chief of staff have also all previously relayed the same message, the official said.Sources familiar with the feud tell ABC News that Azar and Verma have been at odds over the direction of health care policy under Trump, who campaigned on a promise to “repeal and replace” President Barack Obama’s health care law. Now, both are vying for a green light from the White House to move ahead with their ideas and sway national policy.An HHS spokesperson said in a statement the two are working together and have made progress on key issues like pricing transparency.“Secretary Azar’s and Administrator Verma’s top priority is to advance the President’s healthcare agenda through lowering drug costs, advancing competition in the marketplace, and ensuring Americans have access to high quality, affordable healthcare,” an HHS spokesperson said in a statement released to the press.Mulvaney’s office declined to comment.Verma – a former health care consultant from Indiana – arrived at HHS as CMS chief at the start of the administration with close ties to Vice President Mike Pence.Azar didn’t take the helm of HHS until after Trump’s first health secretary, Tom Price, resigned. And as a former pharmaceutical executive who worked as a top health official during the George W. Bush administration, Azar is seen by some as more of an outsider than Verma, although he is considered to have a close working relationship with Pence as well.As Azar and Verma sparred internally on health care, Politico reported that Verma had spent more than $2 million in a one-year public relations contract that was aimed at raising her public profile. An internal watchdog office at HHS has confirmed it’s investigating the contracts upon a request by House Democrats.This past weekend, Politico reported a lost property claim filed by Verma in August 2018 with HHS after items she was traveling with were stolen from her luggage during a work-related trip. According to documents obtained by Politico under the Freedom of Information Act, the form listed $47,000 in jewelry, including a $5,900 Ivanka Trump-brand pendant; she was reimbursed by the federal agency for $2,852.A spokesperson for Verma said she first inquired about recovering the loss with her own insurance company but was told to file a claim through her employer because the items were stolen during a work trip. The law allows federal employees to file claims for stolen property while on duty. The spokesman also said the administrator was instructed to include a “full inventory” of all items in her luggage.“At her own expense the Administrator travels to Washington, DC from Indiana each week to work at CMS, which was why she was traveling with her personal collection of jewelry,” the spokesman said.The CMS spokesman attributed the leaks to a “smear campaign” against Verma’s work.“These recent leaks and gossip are part of a targeted campaign to smear the Administrator and undermine the accomplishments of CMS and the Administration,” the spokesman said. “The Administrator’s number one priority is continuing to deliver on the President’s bold healthcare agenda to ensure Americans have access to high quality, affordable healthcare.”At least one House Democrat, Rep. Joe Kennedy of Massachusetts, has called for her resignation in the wake of both her filed claim on the lost jewelry and steering more than $2 million to public relations contracts.“We have now seen a systemic effort by the administrator to use public funds to elevate her own position,” Kennedy told Politico. Copyright © 2019, ABC Audio. All rights reserved.