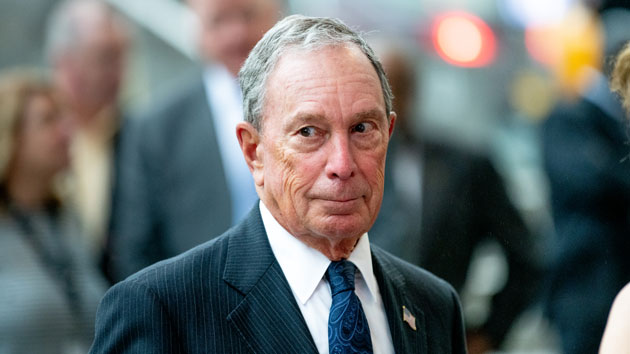 (NEW YORK) — Former New York City Mayor and billionaire Mike Bloomberg will donate $10 million to the House Majority PAC to help defend vulnerable House Democrats, a senior aide has confirmed to ABC News — a move that comes as the party now faces a slew of well-financed Republican attacks on their support of impeachment against President Donald Trump.The multi-million dollar donation also comes amid criticism from his fellow 2020 contenders for how he has leveraged his wealth–especially his large ad buys — as he makes his eleventh-hour jump into the presidential race — some accusing him of “buying his way” into the election.As of Tuesday evening, Bloomberg had hit the marker of $100 million spent on ads promoting his own candidacy; and as he’s now rolling out two new ads angled at a sharp contrast between him and Trump.Bloomberg also has a long history of deep-pocketed donations to help back candidates and causes. On the trail he often points to the help he gave house Democrats in the 2018 midterms — where he spent upwards of $110 million — and 21 of the 24 candidates he supported won their races.For years, he has given to state parties of both stripes; and to candidates and causes supportive of progressive gun measures and the fight against climate change, among other policy positions. The $10 million Bloomberg has pledged in support of House Democrats is a fraction scaled to the over $110 million he spent through his super PAC during the 2018 midterm cycle.His eight figure commitment comes early in the season, contrasted to his past spending, where his large contributions came later on.In a statement provided to ABC News, House Speaker Nancy Pelosi lauded the funds Bloomberg has pledged.”In 2018, Mayor Bloomberg was a critical ally in helping House Democrats regain the majority. Now, the stakes are even higher as we work to make health care more affordable by reducing the skyrocketing cost of prescription drugs, increase wages and root out corruption,” she said. “We welcome and thank Mayor Bloomberg for his support.”In a statement to ABC News, Robby Mook, president of House Majority PAC pointed to Bloomberg’s funds as helping to refute GOP spin.”With this extraordinary commitment from Mayor Bloomberg, we’ll be able to ensure voters understand how their Democratic House majority is working on the issues that matter, like protecting access to affordable health care and reducing the cost of prescription drugs,” said Mook, who is a former campaign manager for Hillary Clinton’s presidential bid.Though Bloomberg had been reticent to hop on board with impeachment proceedings at first – he is now supportive.”I think it’s a very serious thing and was before opposed to it, but after looking at all the evidence – I think yes. Sad but yes…” he said in his first television interview since launching his bid. “He does not seem to understand that he is an elected official whose job it is to work for the public rather than himself.”For his part, Bloomberg now looks towards buttressing the push against President Trump – a foil that likewise fuels his own campaign.”Sadly Republicans are more interested in protecting the President than the Constitution. Fortunately House Democrats are holding the President accountable, and they need resources to stay in office,” Bloomberg said in a statement to ABC Wednesday. “I was proud to help Democrats win back the House in last year’s midterms, and I’m proud to support them again now.” Copyright © 2019, ABC Audio. All rights reserved.

US sends Bradley Fighting Vehicles to Syria to boost security for troops following Russian encounter
Black man beaten by Georgia deputy speaks out after release from jail: ‘I feared for my life’
Federal judge halts changes to Postal Service, citing ‘voter disenfranchisement’
Dax Shepard gives himself an undercut to “match” his daughter
Tara Lipinski opens up about undergoing endometriosis surgery to break taboo of ‘hush hush topic’
TikTok, WeChat to be banned from US app stores starting Sunday