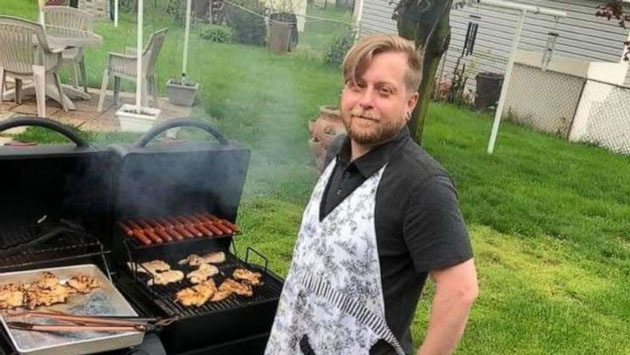 (ANN ARBOR, Mich.) —  A family who lost someone they love to a drug overdose is sharing their story in hopes of helping others who may be struggling with addiction.On June 1, Christopher Pennington of Ann Arbor, Michigan, died. The 35-year-old father of two faced addiction before ultimately overdosing.Pennington’s family describes him as a “giver” — a person who wanted to help others, no matter what.He loved skateboarding, music, was a drummer in a band and enjoyed playing disc golf with his brothers and his 8-year-old son.”I have three other children and 10 grandchildren and it’s affected us all — he was a major part of our lives,” Pennington’s mother, Susan Cicotte, told “Good Morning America.” “When we’d have family get-togethers, he did all the grilling. When he was here, he was here to help me. He was my best friend … he died in the very same hospital he was born in.”On the day Pennington died, his family gathered around his hospital bed to say goodbye. His mom snapped a photo of the heartbreaking moment.Six months later, Susan Cicotte’s daughter-in-law, Nichole Cicotte, who is married to Pennington’s brother Michael, shared the image on Facebook. The post garnered nearly 2,000 comments and 16,000 shares.

“People were writing, ‘I’m checking into rehab.’ [or] ‘I’m not going to do drugs today,"” Susan Cicotte said, adding that Nichole asked if she should remove the post after the viral attention.”I said, ‘No. If this helps one person stay alive or one person through their grief, then Chris is doing his job even when he’s dead,"” Susan Cicotte added. “‘This is what Chris would want."”Nichole Cicotte said her brother-in-law would give the shirt off his back to someone in need, and she felt it was important to share his story.”He came all the way to Michigan from Wisconsin one year when the family was in a feud, because he wanted to fix things and bring his family together,” Nichole Cicotte told “GMA.” “He was hilarious and caring. That man had so much love to give, but never gave any to himself.”In her post, Nichole Cicotte writes, in part:This is addiction.It’s a 3am phone call that we knew was coming, but prayed it never would.It’s a doctor having to tell another family that their loved one is legally braindead.It’s a mother’s heart being ripped out from her chest.This is a room (and a whole hospital waiting room) full of brothers, sisters, nieces, nephews, cousins, aunts, uncles, and friends beating themselves up that they didn’t do more to save you.It’s a daughter and a son who have to figure this world out without their dad.This is an empty chair at every family event…..This is a man who loved with everything he had. A man who valued family more than anything. A father who adored his children. A son, a brother, a goofy uncle, a friend to anyone who had the pleasure to know him.Drugs don’t love you. Your family and friends do.Susan Cicotte said her son started drinking at the age of 12. He started smoking marijuana at 14 and experimented with other drugs. His drug use became more frequent after his marriage failed. Pennington sought help and had been through rehab twice.Pennington ended up relapsing after he discovered his friend’s body, after that friend died of an overdose, Susan Cicotte explained.When Pennington died, doctors found cocaine overdosed on cocaine and fentanyl (opioid) in his system.On Dec. 3, Susan Cicotte launched her own Facebook community called Parents of Children who OD’d. In one week, it gained over 6,000 followers.”I just woke up on Dec. 3 missing my son deeply so I [thought] I could help other people who were feeling the way that I felt that day,” Susan Cicotte said. “There’s nothing out there for us … this overdose and addiction, it’s got a stigma to it. People don’t understand, this wasn’t his choice. It was the drug, and I really want to stop this.”Susan Cicotte hopes her Facebook community inspires people with addiction to seek help. She also wants to to act as a support system for those who lost loved ones to overdoses.”That’s become my purpose … to take Christopher’s and make it a positive [by trying] to help people. If it helps one person, it would fill my heart with joy,” she said.If you’re struggling with addiction, the Substance Abuse and Mental Health Services Administration can help you locate a treatment facility. Their helpline is free, confidential and open 24 hours a day: 1-800-662-HELP (4357).Copyright © 2019, ABC Audio. All rights reserved.