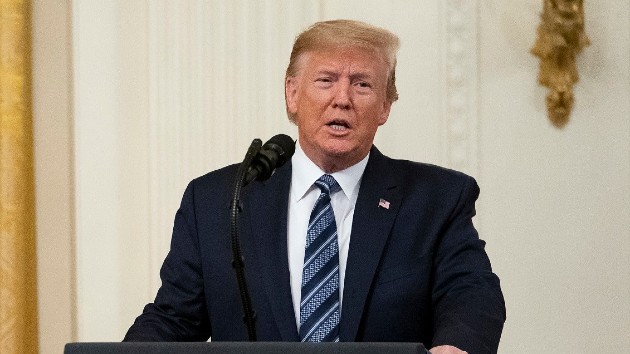 (WASHINGTON) — Democrats on Tuesday unveiled two articles of impeachment against President Donald Trump, a historic step that could lead to a full House vote as early as next week.House Judiciary Committee Chairman Jerry Nadler announced that Democrats were going forward with charges of abuse of power and obstruction of Congress.Nadler said Trump had “violated his oath to the American people.”

“Later this week, the Judiciary Committee will meet to consider these articles of impeachment and to make a recommendation to the full House of Representatives,” Nadler said.He was flanked by House Speaker Nancy Pelosi and other Democratic committee chairs, including House Intelligence Committee Chairman Adam Schiff.”The president’s continuing abuse of power has left us no choice,” Schiff said, going into details behind the charges. “To do nothing would make ourselves complicit in the president’s abuse of his high office, the public trust, and our national security.””The evidence of the president’s misconduct is overwhelming and uncontested,” Schiff said with regard to the president’s actions on Ukraine. “And how could it not be when the president’s own words on July 25th—’I would like you to do us a favor, though’—lays so bare his intentions.”Schiff said Trump had solicited a foreign nation to publicly announce that investigations into his political opponent, and by doing so, had undermined U.S. national security.

Rep. Adam Schiff says Pres. Trump's "continuing abuse of his power has left us no choice.""To do nothing would make ourselves complicit in the president's abuse of his high office, the public trust, and our national security." https://t.co/dxkM5uBLPX pic.twitter.com/1FMkt4nJOn

“When the president got caught he committed his second impeachable act,” Schiff said, referring to obstruction of Congress.”If allowed to stand it would decimate Congress’ ability to conduct oversight of this president or any in the future, leaving this president and those who follow free to be as corrupt … as they would like,” he said.”Why not let him cheat in one more election. Why not let him cheat just one more time?” Schiff asked rhetorically, responding to critics who say Democrats are moving too fast.He said Democrats had to move quickly in order to protect the 2020 election and could not wait for court challenges to congressional subpoenas to play out.Pelosi began the announcement by calling it a “solemn” occasion similar to when all members of Congress take an oath to protect the Constitution.As if to reinforce that, she and her fellow Democrats walked out of the room silently without taking questions.The House Judiciary Committee was expected to publicly take up the articles for debate and approval as soon as Thursday, though the panel has not yet sent notice of a meeting.With Democrats about to make their announcement, Trump tweeted Tuesday morning it is “sheer Political Madness” to impeach him because of his results as president.

To Impeach a President who has proven through results, including producing perhaps the strongest economy in our country’s history, to have one of the most successful presidencies ever, and most importantly, who has done NOTHING wrong, is sheer Political Madness! #2020Election

Judiciary Committee Democrats huddled before the morning announcement.Rep. David Cicilline, D-R.I., told reporters he thinks “the mix of articles will be the consensus of the committee.”“I think so long as the articles reflect the evidence we collected and demonstrate that the president abused the power of his office by soliciting a foreign actor to interfere American presidential election that is at the heart of it this. This betrayal of the national interest using the enormous power of his office for personal advantage political gain, and for the public good,” he said.Rep. Pramila Jayapal, D-Wash., said she thinks “the most important thing is how do we hold the president accountable for his abuse of power, his obstruction of Congress, and the pattern of conduct.”Judiciary Committee staff worked late into the night Monday over Chinese food to finish preparing the charges against the president, which Democrats are expected to take to the floor for a vote as soon as next week, ahead of the Christmas recess.On Monday, in closing arguments, Democratic lawmakers called attorneys from the House Intelligence and Judiciary committees to present evidence from the Democrats’ Ukraine investigation and to argue that Trump abused his power by pressuring Ukraine to launch investigations that could benefit him politically, specifically against former Vice President Joe Biden and his son.Republican lawyers from the same House panels argued against the Democrats’ impeachment efforts and defended the president’s actions at the center of the impeachment inquiry.Nadler concluded the nearly 10-hour hearing with a summation of the arguments: “The fact are clear. The danger to our democracy is clear and our duty is clear.””President Trump violated his oath to the American people and placed his own private interests ahead of our national security, and constitutes a threat to our election and government,” Nadler continued. “Such conduct is impeachable.”