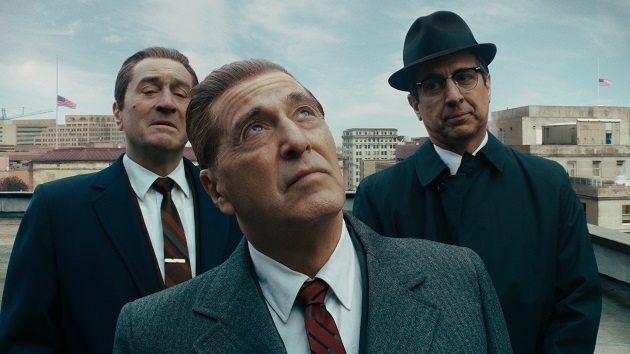 Courtesy of Netflix
Posted on December 9, 2019 by ABC News

(NEW YORK) — The Critics’ Choice Awards, widely viewed as an early predictor for the Oscars, has The Irishman topping its list of nominees, which came out Sunday.

While The Irishman racked up 14 nominations, Once Upon a Time… in Hollywood, the film with the second highest amount of mentions at 12, is also shaping up to be a fierce contender.

Martin Scorsese’s The Irishman is up for top awards such as best picture, best director, and best adapted screenplay, as well as acting nominations for stars Robert De Niro, Al Pacino, and Joe Pesci.

Quentin Tarantino’s Once Upon a Time… in Hollywood also earned acting nods for Leonardo DiCaprio, Brad Pitt, and Julia Butters on top of nods for best picture, best director, and best original screenplay.

Streaming giant Netflix racked up 61 nods while HBO trails in a distant second for most TV nominations, at 33.  Amazon follows at 14 and then NBC with 12.

Netflix’s series When They See Us is the highest nominated television series for best limited series, best actor, as well as two nominations each for best supporting actor/actress in a limited series or movie made for television — for a grand total of six.

NBC’s This Is Us is up for five awards as is Pop’s Schitt’s Creek.

Several actors could possibly win in both movie and television categories this year, such as Laura Dern for Big Little Lies and Netflix’s movie Marriage Story.

For a complete list of nominees, check out CriticsChoice.com.  The Critics’ Choice Awards airs Sunday, January 12 on the CW.