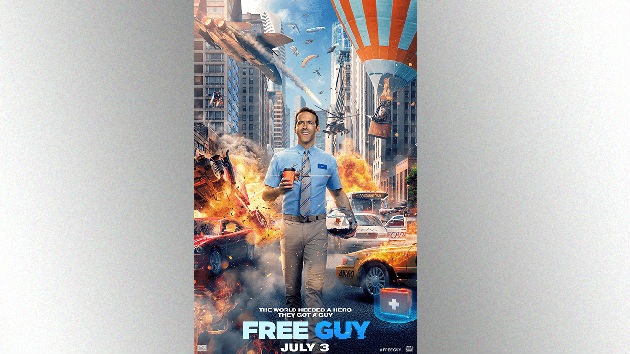 (LOS ANGELES) — Players of a very violent Grand Theft Auto meets Fornite video game have met their match with Ryan Reynolds in Free Guy, a movie about a background character of a gaining sentience and fighting to bring order to his ravaged city.

The official trailer of 20th Century Fox’s upcoming action flick premiered on Saturday.  It begins with Reynolds, who plays a bank teller named Guy, beginning to wonder why every day — which consists of bank robberies and being held hostage — is the same.

When Guy determines that “today is going to be different,” he takes matters into his own hands during a routine bank robbery at his job and fights back — accidentally killing a game player.

He soon discovers that the player’s glasses lists a series of objectives and hidden items, cluing him in that his world isn’t exactly what it seems.

Guy teams up with another background character, Milly a.k.a. Molotov Girl played by Jodie Comer, in order to restore peace to their virtual world.  However, their mission becomes a race against the clock when the video game’s developer, played by Taika Waititi, plans to shut the game down.

20th Century Fox is owned by Disney, the parent company of ABC.