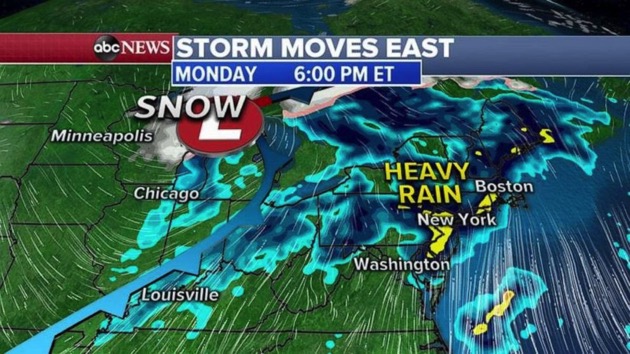 (NEW YORK) — Over the weekend a storm system that moved into the West Coast brought more than 5 inches of rain to northern California around the Bay area. This heavy rain flooded streets and even produced a few mudslides in the state.In the mountains, heavy snow of 12 to 17 inches fell from California to Montana making driving extremely difficult on the roads.Now this storm system is in the Midwest and the Great Lakes, bringing with it heavy snow from the Dakotas to Minnesota and into Michigan. A treacherous Monday morning commute is expected in the Twin Cities.Numerous snow alerts have been issued this morning from the Upper Midwest and into the Great Lakes.Further south, heavy rain is moving through Indianapolis and Detroit.Some of the heavy rain will move into the Northeast later this afternoon into the evening hours, just in time for evening rush hour. Snow will be ending in the Midwest by Monday afternoon.By Tuesday, the cold front will move through the Midwest and the Northeast and, behind it, colder air will mix with precipitation changing it to snow from the Mid-South all the way into the Northeast.By Tuesday night into Wednesday morning, the rain will change to snow for most major cities along I-95 and there could be several inches of accumulation.The Wednesday morning rush could be messy from Washington, D.C. to New York City and Boston.Snow could even fall Tuesday evening in the South from northern Mississippi to Nashville, Tennessee and into West Virginia.At the moment, it looks like the heaviest snow Tuesday evening and Wednesday morning will be from the southern Appalachians and into southeast New England where 3 to 6 inches of snow could fall in Boston.New York City and Philadelphia could see 1 to 3 inches of snow with Washington, D.C. getting a possible dusting.Behind this storm system, the coldest air of the season is expected for the Midwest and the Great Lakes with winds chills well below zero.Actual temperatures will be below zero across the Upper Midwest. Some of this cold air will move into the Northeast Wednesday, but it is not expected to be as cold as the Midwest.Copyright © 2019, ABC Audio. All rights reserved.