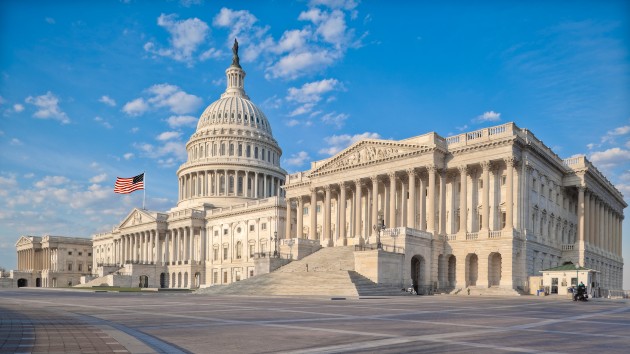 (WASHINGTON) — The House Judiciary Committee on Monday will hear testimony from Democratic lawyers laying out their case for President Donald Trump’s impeachment, setting off a busy two weeks on Capitol Hill expected to end with a House floor vote on the charges ahead of Christmas.As they prepare to release articles of impeachment against Trump — as early as this week — lawmakers will hear attorneys from the House Intelligence and Judiciary committees lay out evidence from the Democrats’ Ukraine investigation and argue their case that Trump abused his power by pressuring Ukraine to launch investigations that could benefit him politically.With the White House refusing to participate in the House hearings and accusing Democrats of launching unfair and “baseless” proceedings, Republicans from the same House panels are expected to argue against Democrats’ impeachment efforts and could offer some defense of the president’s actions towards Ukraine at the center of the impeachment inquiry.

Here is how the hearing is unfolding. Please refresh for updates.

11:32 a.m.The committee is in a short recess.ABC News’ Katherine Faulders tweets out a letter from Chairman Nadler to Ranking Member Collins saying there is no need for the GOP’s requested witnesses since President Trump isn’t requesting any. Nadler also says there is no need for House Intelligence Committee Chairman Adam Schiff to appear.Even after Nadler has denied Republican requests to hold a hearing with their own witnesses, including, they’re not letting go of that talking point.During the break a new sign appeared on the Republican side of the dais with Schiff’s face on a milk carton. It reads “Missing” and says “if found contact Jerry Nadler.” according to Faulders and ABC’s Benjamin Siegel in the hearing room.

10:47 a.m.The committee is now hearing summations of the evidence from both sides, starting with the Director of Investigations for the House Intelligence Committee, Daniel Goldman.He’ll be followed by the Republican presentation.”We are here today because Donald J. Trump, the 45th President of the United States, abused the power of his office—the American presidency—for his personal political benefit.” Goldman says.”President Trump directed a months-long scheme to solicit foreign help in his 2020 reelection campaign, withholding official acts from the government of Ukraine in order to coerce and secure political interference in our domestic affairs,” he begins. “As part of the scheme, President Trump applied increasing pressure on the president of Ukraine to publicly announce two investigations helpful to his personal reelection efforts.”He applied this pressure himself and through his agents within and outside of the U.S. government by conditioning a desperately-sought Oval Office meeting and $391 million in taxpayer-funded, congressionally-appropriated military assistance—vital to Ukraine’s ability to fend off Russian aggression—on the announcement of political investigations helpful to his personal interests.” Goldman says.

10:18 a.m.Republican Counsel Steve Castor presents the counterargument to Berke’s conclusions, saying he would provide context to support that the evidence does not support Democrats’ allegations.”Overall, at best, the impeachment inquiry record is riddled with hearsay, presumptions, and speculation. There are conflicting and ambiguous facts throughout the record—facts that could be interpreted in different ways,” Castor says in his opening statement.He argues that Democrats’ haven’t proven Trump acted with malicious intent in his dealings with Ukraine and cited comments from President Zelenskiy that he did not feel pressured on the July 25 call.Castor also cites testimony from legal experts last week, specifically from George Washington University Law School professor Jonathan Turley, who raised concerns Democrats are pushing for impeachment too quickly to fully build a case and pursue more information.”The artificial and arbitrary political deadline by which Democrats are determined to finish impeachment by Christmas leads to a rushed process. And missed opportunities to obtain relevant information,” Castor said.

Barry Berke, the majority counsel for the Judiciary Committee, argues the evidence collected in the impeachment inquiry so far shows President Trump’s behavior fits the description of “high crimes and misdemeanors” and constitutes an impeachable offense.Berke specifically says the president abused his power, betrayed the national interest, and took actions that would compromise American elections.”The scheme by President Trump so brazen, so clear, supported by documents, actions, sworn testimony, uncontradicted, contemporaneous records, that it’s hard to imagine that anybody could dispute those acts, let alone argue that conduct does not constitute an impeachable offense or offenses. This is a big deal. President Trump did what a president of our nation is not allowed to do,” he says.ABC News’ Katherine Faulders in the hearing room reports: The overwhelming theme from Democratic Counsel Berke was this: President Trump thought he got away with the Ukraine scheme. He used his powers to interfere with the investigation, but then he got caught. And his abuse of power is an impeachable offense.Berke played multiple clips of the president, including one where Trump said: “Then I have an Article 2, where I have the right to do whatever I want as president,” referring to the Constitution.Berke said that the president’s “excuse” is that the military aid to Ukraine was ultimately released but Berke argue the aid was released only “after President Trump got caught doing the scheme.””He put his political re-election interests over the nation’s national security and the integrity of its election. He did it intentionally. He did it corruptly. He abused his powers in ways that the founders feared most. No person in this country has the ability to prevent investigations and neither does the president,” Berke says.

9:25 a.m.Ranking Member Rep. Doug Collins continues to attack Democrats’ for pursuing a predetermined outcome in the impeachment inquiry, saying they already decided to vote to impeach President Trump. “For anyone to think that this was not a baked deal is not being honest with themselves,” he says in his opening statement. “At the end of the day all this is about is a clock and a calendar, ” Collins says.

9:17 a.m.As he gets back to his opening statement, Nadler cites testimony from constitutional experts from last week’s hearing, setting up the Democrats’ argument that President Trump’s behavior exactly fulfills the type of abuse of power the framers had in mind when they laid out the process for impeachment. “As we heard in our last hearing, the framers of the Constitution were careful students of history and clear in their vision for the new nation. They knew that threats to democracy can take many forms, that we must protect against them,” Nadler says. “The debates around the framing make clear that the most serious such offenses include abuse of power, betrayal of the nation through foreign entanglements and corruption of public office,” he continues. “Any one of these violations of the public trust would compel the members of this committee to take action. When combined, in a single course of action, they state the strongest possible case for impeachment and removal from office,” he says.

9:08 a.m. The New York Democrat who chairs the House Judiciary Committee, Rep. Jerry Nadler, gavels the hearing into session at 9:08 a.m. Republicans raise an objection within seconds of Nadler beginning his opening statement, setting the stage for more objections to come. A protester starts shouting from the back of the room: “Jerry Nadler you’re the one committing treason” and “We voted for Donald Trump” — interrupting Nadler. Capitol Police remove him from the room.

The hearing is set to begin at 9 a.m. but relatively few committee members are in the room. Republicans have set up a large sign with the words “Where’s Adam?” in white letters against a black background, signaling their displeasure that House Intelligence Committee Chairman Adam Schiff will not be testifying as they wanted. They have repeatedly accused him of lying about whether he knew and coordinated with the intelligence community whistleblower who triggered the impeachment probe. ABC’s Mary Bruce reports this might the last chance Democrats have to persuade the American public on such a nationally-televised scale before a vote on articles of impeachment.

8:40 a.m.ABC’s Benjamin Siegel and Allison Pecorin reported a Democratic official told reporters on Saturday that Democrats intend to use Monday’s hearing to make their “theory of the case” against President Donald Trump and his abuse of power.Democrats, according to the official, plan to argue on Monday that Trump’s use of his office for personal political gain ahead of the election represents the “framers’ nightmare,” by acting in a way that “betrays our national security and corrupts our elections using a foreign power.”They will argue that Trump’s actions were part of a “repeated pattern,” and that the Ukraine episode is important because it represents a “future pattern,” highlighting the urgency of moving quickly to impeach the president ahead of the 2020 election.8:35 a.m.As members start to take their seats in the hearing room, ABC News Senior Congressional Correspondent Mary Bruce reports House Speaker Nancy Pelosi is facing a difficult challenge making the final call on how broad articles of impeachment will be.She says Pelosi has to be especially mindful of the views of Democrats in swing districts.GOP Rep. Debbie Lesko of Arizona, a member of the House Judiciary Committee, tells ABC News’ Tom Llamas that there is no evidence of any impeachment conduct, that Democrats can’t point to any “crimes committed.””This whole thing has been a farce,” she says.

Democratic members and aides spent the weekend in Washington preparing for the upcoming hearings. Judiciary Committee Democratic staff also released a report highlighting the historical and legal arguments behind their impeachment efforts against Trump.On Saturday, they huddled with Harvard Law School professor and constitutional scholar Laurence Tribe, who’s been advising the caucus throughout the impeachment process. They also prepared for the upcoming hearing in the stately Longworth Office Building hearing room, which has hosted weeks of public impeachment proceedings.Working with committee and leadership staff behind closed doors, they prepared their questions for Monday’s hearing, with former Hill staffers playing the roles of committee Republicans, according to sources familiar with the preparations.They also discussed the potential charges against Trump, which they’re expected to introduce and approve in the Judiciary Committee later this week.”We need to make it clear within those articles that there is a pattern of conduct here, that Ukraine was the most egregious example of the president abusing his office while he was president of the United States, shaking down a foreign nation to interfere in our elections,” Rep. Pramila Jayapal, D-Wash., said Sunday. “We need to be focused, we need to be clear, we need to present the best possible case if we are moving in this direction.”In an interview with CNN Sunday, House Judiciary Committee Chairman Jerry Nadler, D-N.Y., did not commit to including evidence of obstruction of justice from special counsel Robert Mueller’s report in the forthcoming articles.”We have a very rock-solid case,” Nadler said on CNN’s State of the Union on Sunday. “I think the case we have, if presented to a jury, would be a guilty verdict in about three minutes flat.”House Republicans are expected to argue that the Democrats’ case falls short, that they lack sufficient firsthand evidence to conclusively charge Trump with abusing his power and undermining U.S. national security in his dealings with Ukraine.In requests for additional witnesses and information, they have outlined a potential GOP strategy for a Senate impeachment trial that could focus on former Vice President Joe Biden’s son Hunter and his business dealings in Ukraine, as well as the intelligence community whistleblower behind the complaint that sparked the impeachment inquiry.