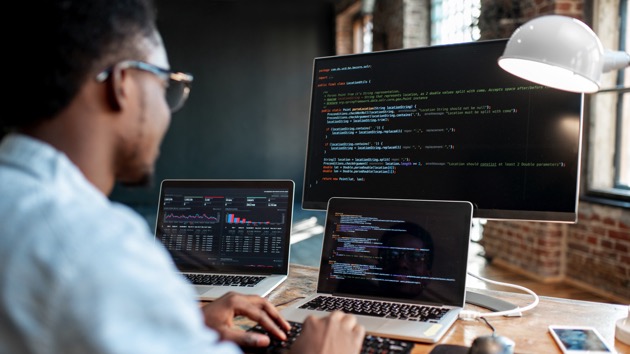 (WASHINGTON) — The majority of job growth in high-tech industries is concentrated in just a handful of metropolitan areas in the U.S., and this regional divide drives “national inequality” as the rest of the nation struggles to keep up, according to a new report.More than 90 percent of the country’s growth in “innovation sector” jobs between 2005 and 2017 have taken place in just five cities: Boston, San Francisco, San Jose, Seattle and San Diego, according to a report from Washington, D.C.-based think tanks the Brookings Institute and the Information Technology and Innovation Foundation.The “innovation sector” is comprised of the highest-tech, highest research and development sub-sector of “advanced industries,” according to the researchers. Advanced industries was a previous delineation for the nation’s highest-value industries according to the Metropolitan Policy Program at Brookings.Lucrative jobs in the tech sector dominated Glassdoor’s recent ranking of highest-paying jobs, and have consistently made notable hiring gains in Labor Department job reports.This doesn’t necessarily mean those looking for a job in fast-growing industries should flock to these five cities, the report points out. The concentration of rapid growth in these metropolises have led to other crises for residents — including “spiraling real estate costs, traffic gridlock, and increasingly uncompetitive wage and salary costs.”For the “left-behind” places, as the report refers to them, the impact of this trend has resulted in a “brain drain, the hollowing out of the labor market, and industrial decline.”In “America’s left-behind places” where tech and innovation industries do not have a foothold, “shuttered plants, faded downtowns, and depopulated residential neighborhoods exemplify the economic and social costs of regional imbalance,” the report states.”In short, the geographic distance between the left-behind masses and the fortunate few in superstar hubs undercuts economic inclusion and contributes to national inequality,” the report states.The high cost of business and other expenses in these over-saturated tech hubs have also led some companies to move activity overseas, according to the report, leading to less innovation industry activity in the U.S.The authors of the report are calling for federal investment into creating new tech hubs throughout the heartland to ameliorate this divide, and keep the U.S. innovation industry competitive.”America’s successful tech hubs haven’t emerged by accident — most are products of deliberate policy choices and federal government support,” president of the ITIF and a co-author of the report, Robert D. Atkinson said in a statement.The economics idea “that markets can be left to drive innovation has instead left the heartland behind,” he added.”A strong federal effort focused on helping some metros transition into self-sustaining tech hubs can help more Americans benefit from the significant opportunities enabled by high-tech industry growth,” Atkinson said.Mark Muro, a senior fellow at Brookings Metropolitan Policy Program and co-author of the report, said the divide has reached “emergency status.””The nation’s tech-driven spatial divides have reached emergency status and won’t resolve themselves on their own,” he said in a statement. “It’s time for the nation to push back against these trends and conduct a major experiment to see if we can help eight to 10 promising metros emerge as really dynamic anchors of growth in the nation’s heartland.”There are many factors that contributed to why the tech industry took off in the select cities. One of them is because by the 2010s, the places began to reap the benefits of “cumulative causation,” or starting out with a few advantages and then having them compound over time, according to the report.The “earlier knowledge and firm advantages” of some of the large innovation hubs such as Boston, Silicon Valley and Seattle, “now attract even more talented workers, startups, and investment, creating a gravitational pull toward the nation’s critical innovation sectors while simultaneously draining key talent and business activity from other places,” the report states. Copyright © 2019, ABC Audio. All rights reserved.