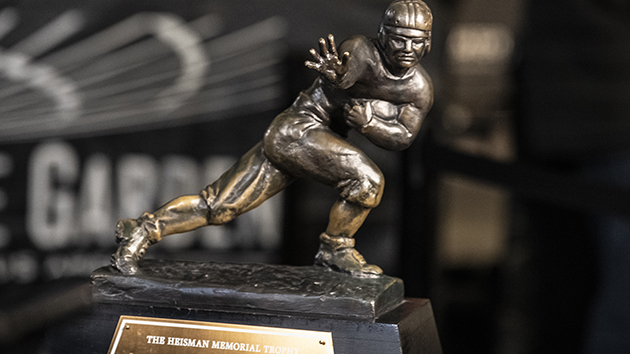 (NEW YORK) — Four of college football’s biggest stars are heading to New York City for the Heisman Trophy Ceremony on Saturday.Three quarterbacks — LSU’s Joe Burrow, Ohio State’s Justin Fields, and Oklahoma’s Jalen Hurts — along with Ohio State’s defensive lineman Chase Young, were named finalists on Monday for the award given to college football’s most outstanding player.The four players represent three of the teams chosen to play in this year’s College Football Playoff. The only CFP team without a representative is #3 Clemson.Burrow, whos pent three years at Ohio State before transferring to LSU, tossed an SEC-record 48 touchdown passes and 4,715 passing yards this year. His head coach Ed Orgeron said Saturday that Burrow deserves the award.”In my opinion, he’s going to win it. The best thing about Joe is he’s a team plaer. All he wants to do is win this game. Individual awards aere not high on his list. That’s what makes him such a great team player.”Burrow would be just the second LSU player ever to win the award.Hurts, meanwhile, could become the third Oklahoma quarterback to win the Heisman. He transferred to Oklahoma after spending his first three college seasons at Alabama, attempting to follow in the footsteps of Baker Mayfield (2017) and Kyler Murray (2018). Mayfield and Murray each went on to become the top pick in the NFL Draft. Fields also transferred before this season, after playing his freshman year at Georgia. He threw 40 touchdown passes and just one interception this season. Young, meanwhile, is just the fourth defensive lineman to be named a Heisman finalist. None of the previous three finished higher than fourth in the Heisman Trophy voting. Copyright © 2019, ABC Audio. All rights reserved.