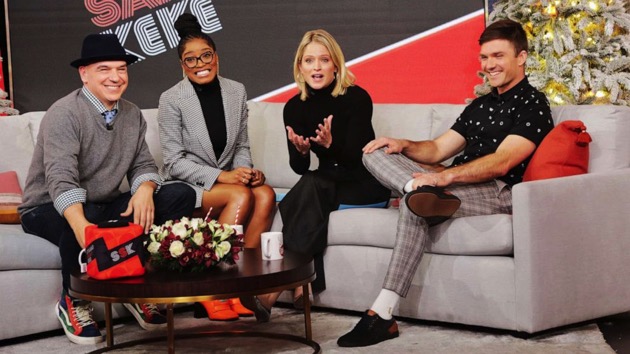 (New York) — Sean Hunter, the actor at the center of the now infamous Peloton ad, spoke out about the sting of public backlash and cancel culture on “Strahan, Sara & Keke.”“I kept watching it, trying to find what was negative about it. And I don’t know, I just don’t know,” Hunter said. “It was a two-day shoot … I have one line … we finished, and I went back to my normal life. And when it comes out, boom, all this negative backlash. It blows me away.”Hunter played the role of the husband in the commercial, which now as more than 7 million views on YouTube alone. The character Hunter portrays in the ad buys his wife a Peloton indoor bike. His wife then documents her progress over a year using the bike and ends with the couple watching a video of her journey as they celebrate her progress together.Social media quickly lit up with memes, videos & blurbs criticizing the ad, alleging the company was pushing a sexist and chauvinistic narrative. Peloton’s stock went down considerably shortly after the advertisement’s release.

Thank you for not giving up on me honey. I know I have a lot of work to do…I promise I’m going to fix this. You’re the best husband ever. pic.twitter.com/VJsrxVxZak

Nothing says “maybe you should lose a few pounds” like gifting your already rail thin life partner a Peloton pic.twitter.com/E2M9gFdD5A

“My face is now the face of the patriarchy,” Hunter continued. “It’s so whoa, hold on a minute…slow your roll. That’s not who I am. People have to remember I’m the actor, this isn’t who I am. I’m a totally different person in real life. I’m a teacher. I teach children.”Monica Ruiz, Hunter’s co-star who played the wife in the ad, also says the outcry online took her by surprise.“I was happy to accept a job opportunity earlier this year from Peloton and the team was lovely to work with,” Ruiz said. “Although I’m an actress, I am not quite comfortable being in spotlight and I’m terrible on social media. So to say I was shocked and overwhelmed by the attention this week (especially the negative) is an understatement.”Ruiz went on to say she felt grateful actor Ryan Reynolds helped her make light of the controversy in a separate advertising campaign for his distilled spirits brand.“When Ryan and his production team called about Aviation Gin, they helped me find some humor in the situation,” Ruiz said. “I am grateful to both Peloton and now Aviation Gin for the work and giving me the opportunity to do what I love to do.”

Peloton also responded to the backlash in a statement to ABC News, saying, “Our holiday spot was created to celebrate that fitness and wellness journey. While we’re disappointed in how some have misinterpreted this commercial, we are encouraged by- and grateful for- the outpouring of support we’ve received from those who understand what we were trying to communicate.”Hunter told co-host’s Sara Haines, Keke Palmer & guest co-host Michael Symon he’d be interested in what the public’s reaction would be if the roles were reversed in the advertisement.“What I want to see now is the follow-up commercial,” Hunter said. “I want to see my co-actor giving me the Peloton and then seeing my yearlong transformation. That’s what I want to see.”Copyright © 2019, ABC Audio. All rights reserved.