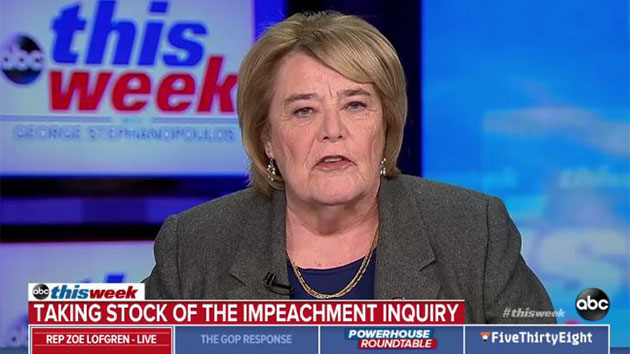 (WASHINGTON) —  President Donald Trump “hits all the buttons” on high crimes and misdemeanors, abusing his presidential power in a way similar to President Richard Nixon, said House Judiciary Committee member Rep. Zoe Lofgren, D-Calif., on ABC’s “This Week.””In the case of President Trump, not only has he abused his power to improperly put his thumb on the scale for the election, he used a foreign power to do it. And that really hits all of the buttons that the founding fathers were concerned about,” Lofgren told ABC News Chief Anchor George Stephanopoulos on Sunday.”The Constitution says, the Congress shall have the sole authority when it comes to impeachment. And so the question is, with the evidence we have, can we make a sound conclusion? I think we can,” the California Democrat added.In response, a key defender of the president’s dealings in Ukraine, Rep. Matt Gaetz, R-Fla., criticized Democrats’ standards of impeachment for Trump.”What is so dizzying, George, is the evolving standard for impeachment from Democrats. Through most of 2019, Nancy Pelosi said she opposed impeachment, not because the Mueller facts weren’t strong enough in her view, but because it wasn’t bipartisan,” Gaetz told Stephanopoulos.Both representatives serve on the House Judiciary Committee, the congressional panel tasked with drawing up articles of impeachment against the president.Lofgren has played a role in every impeachment inquiry in recent United States history. During the early 1970s Watergate scandal, Lofgren helped draft articles of impeachment for President Richard Nixon while working as a congressional staffer to a member of the House Judiciary Committee.At the time of President Bill Clinton’s impeachment in 1998, Lofgren had served in Congress for four years. Sitting on House Judiciary, the congresswoman watched as the Republican-controlled committee drafted and approved articles of impeachment for the Democratic president.The two representatives also disagreed on whether Trump should call witnesses to the panel.”The president has improperly withheld important witnesses,” Lofgren said on “This Week” Sunday. “The idea of absolute immunity is preposterous.”Gaetz disagreed, telling Stephanopoulos, “The president has to make decisions not only for him but for the presidency.””I think it would inure to the president’s advantage to have people testify who could exculpate him, but they — we want to preserve an executive branch where there are out-of-the-box strategy sessions where people come up with crazy ideas and reject those ideas and hone them,” he added.During the Judiciary Committee’s impeachment hearing on Wednesday, four legal scholars evaluated whether the president’s involvement with Ukraine constituted an impeachable offense. Three of the witnesses, invited by the Democrats, argued that President Donald Trump abused presidential power in his dealings with Ukraine. The other witness, invited by Republicans, disagreed. He said that he believed there was not enough evidence to remove Trump from office.On “This Week,” the Florida Republican also called “odd” the president’s personal attorney Rudy Giuliani’s trip to Ukraine this past week, which Gaetz had previously question in an interview on CNN.”But it is weird that he is over there,” Gaetz said on of Giuliani’s trip on Sunday. “I’m very grateful that very soon after I made those comments on CNN, the president put out a statement that said Rudy Giuliani does want to come into Congress and explain his role, explain what he’s been up to.””And I believe that the president urging Mayor Giuliani to provide that clarity to the Congress will be helpful in resolving what seems to be odd having him over there at this time,” Gaetz added.The Judiciary Committee will hold its second public impeachment hearing on Monday when lawyers for the Democrats and Republicans from the House Judiciary and Intelligence Committees will present findings from their investigations.Copyright © 2019, ABC Audio. All rights reserved.