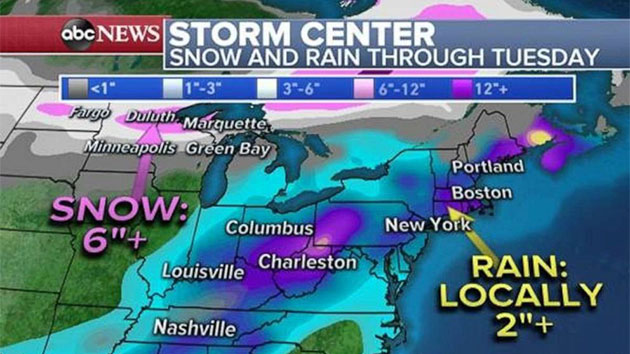 (NEW YORK) —  A storm in the western United States is bringing heavy rain, gusty winds and mountain snow from California to the Rocky Mountains this morning.Heavy rain from the storm brought flash flooding to San Francisco on Saturday prompting road closures in parts of the city. North of the Bay Area, 5.75 inches of rain was reported in Hobergs, CA. Gusty winds also downed some trees in the area. In the Sierra, snow has already accumulated up to 8 inches this morning. Snow totals through Monday could reach as much as 3 to 4 feet. This will cause significant travel delays in the mountain passes.Heavy rain in northern California will continue to bring the threat for rock slides and landslides today. Additionally, there is a threat for avalanches in parts of the Sierra, especially near the Lake Tahoe Area. There is an avalanche warning in this area through the morning hours of Sunday.This storm is about to move eastward today, and part of this overall system will emerge from the Rockies late tonight and rapidly change the weather for the central and eastern U.S. over the next few days. Winter Storm warnings remain posted for the Sierra today and winter weather advisories are in effect for parts of the Rockies and upper Midwest.By tomorrow morning, a new low pressure system will quickly move into the upper Midwest and bring some snow to parts of Minnesota and Wisconsin. The morning commute in those regions could be treacherous with snow falling heavily at times.Ahead of the low pressure, heavy rain is expected to develop. Especially in parts of the northeast U.S. where snowfall was heavy just 1 week ago, the combination of rapid snow melt and locally heavy rain could bring some localized flooding.As the storm moves into Canada, the extended cold front will become quite powerful and stretch deep into the southern U.S.The impacts of this cold front are both in precipitation and in temperature. First, ahead of the cold front, warm mild air will allow temperatures to rapidly rise into the 50s and 60s — especially on Tuesday.For parts of the east coast — especially in the northeast — that will be a nice welcome. However, the approaching cold front will bring rain, which could be heavy at times and bring 1 to 2 inches of rain, especially in the northeast U.S.As the cold front passes, temperatures will plummet. It is looking more and more likely that there could be a 20 to 30 degree temperature difference within just a few hundred miles on Tuesday in parts of the southern and eastern U.S. as can be seen between New Orleans, 68 degrees, and Dallas 38 degrees, on Tuesday morning.In New York it will be in the upper 50’s on Tuesday, but on Wednesday, temperatures will be the upper 20’s and low 30’s.The global forecast models are now also indicating that a decent amount of precipitation will linger behind the cold front.This should result in some notable weather drama, with parts of the southern and eastern U.S. going from mild rain to a mix of cold and snow. Even in the northeast U.S., it is now appearing that a burst of snow is likely on Wednesday morning. The result of this combination of events is locally 1 to 2 or more inches of rain in parts of the eastern U.S. and locally 6 inches of snow in parts of the upper Midwest through Tuesday.On Tuesday night and into Wednesday, a quick burst of snow could bring a couple of inches to parts of the northeast which could cause problems for the Wednesday morning commute. Behind this front, the door will open in the Midwest for very cold air with temperatures crashing. Wind chills could go as low as -20 and -30 in parts of the Dakotas, Minnesota and Wisconsin.The good news is that this cold blast doesn’t look long-lived, and it seems to fall apart to some degrees as it heads to the eastern U.S. late next week. Copyright © 2019, ABC Audio. All rights reserved.