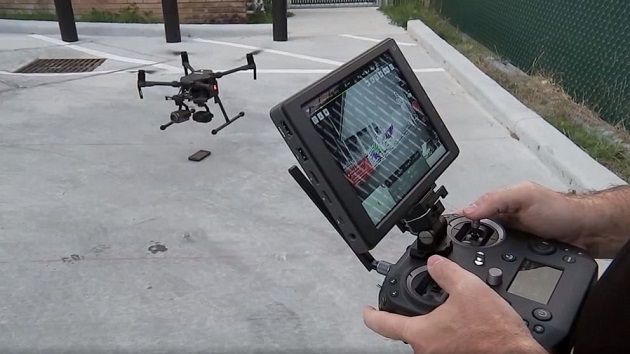 (HOUSTON) — It used to be that police departments needed to have a helicopter to identify and locate fleeing suspects from the air.But not anymore. The advent of drone technology is putting that capability into the hands of even small law enforcement agencies.”It took a helicopter to chase bad guys in the past, and it was very expensive to do that — something that an agency our size could never possibly afford,” Lt. Russell Brown of the Bellaire Police Department in Texas told Houston ABC station KTRK-TV.Now, Bellaire police have three drones at their disposal, and officers say they’re helping save lives. When police in the nearby town of West University were trying to locate a fleeing burglary suspect, the call went out to Officer Aarob Lysack, one of four licensed drone pilots with the Bellaire Police.Lysack, who was patrolling in his police cruiser, put his drone in the air and sent it in search of the suspect.”That drone was able to locate the suspect before the officers could, and basically lead officers to the suspect,” Brown told KTRK.The drone located the suspect running through a backyard, and it recorded him as he tried to get rid of a backpack.When officers recovered it, authorities say the backpack was filled with the stolen items — as well as a gun.”The drone was able to see that, document that on film, and have that video ready for court if needed,” Brown said.For Lysack, drone technology represents a giant leap forward for law enforcement.”It goes about 50 miles an hour. It’s got a range of about three miles, as long as we can see it visually. It can go up to 400 feet high,” said Lysack. “The thermal camera on it can see a human walking down the street or even a warm vehicle that was recently parked. The zoom goes up to 30 times optical and 180 times digital.””I think this is a big game changer,” he said. Copyright © 2019, ABC Audio. All rights reserved.

Meghan McCain of ‘The View’ gives birth to baby girl
Man plummets to his death after falling from branch on cliff while posing for picture
Two deaths in Sandy Township, neither are a danger to the public
Trump and Biden to face off in 1st 2020 presidential debate
Democrats have few tools to slow Senate vote on Supreme Court nominee before Election Day
The Rock welcomes Aldis Hodge to the ‘Black Adam’ cast; shares Hodge’s surprised reaction