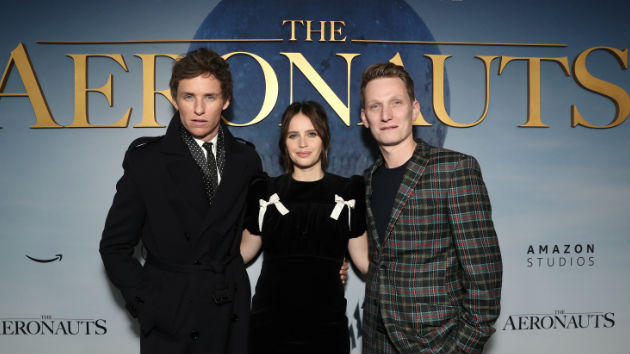 (NEW YORK) — Felicity Jones is rising to new heights in the new inspired-by-true-events film, The Aeronauts.The Oscar-nominated actress plays 19th century balloon pilot Amelia Wren opposite her Theory of Everything co-star Eddie Redmayne, who plays meteorologist James Glaisher. Together, they embark on a dangerous journey to fly higher than anyone in history.Most of the film takes place within the confines of a gas balloon during its ascent into the clouds. Jones and Redmayne even filmed some scenes thousands of feet in the air in a real balloon, while director Tom Harper watched from a nearby helicopter.“I was fine before the film and then afterwards… Now I’m not so good with heights,” Jones tells ABC Audio.  “It’s quite a gradual ascent as you go up…so it doesn’t strike you. It’s actually coming down in the landing where it…can be a bit more rocky.”While Amelia is a fictionalized character, she was heavily based on real-life pioneering aeronaut Sophie Blanchard and serves as a role model for young women.“She was a massive inspiration for Amelia Wren,” Jones says. “It’s so important to have those characters when you’re growing up and watching films and go, ‘These things that I’m told might be impossible to do, I can do them if I put my mind to it.’”Now, Jones is onto her next adventure. Earlier this week, People confirmed that the actress is expecting her first child with husband Charles Guard.The Aeronauts hits theaters today and will be available on Amazon Prime Video starting December 20.