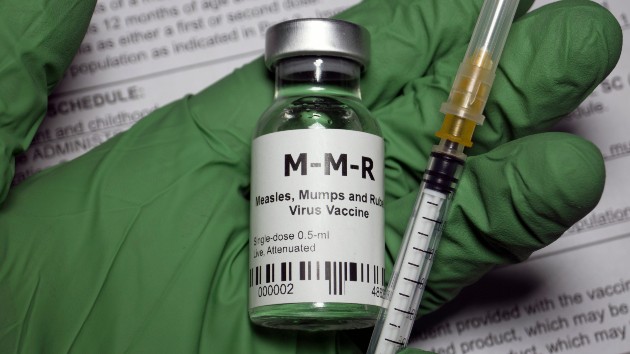 (WASHINGTON) — More than 140,000 people around the world died of measles last year, most of them children under the age of 5, according to a report published by the World Health Organization and Centers for Disease Control and Prevention Thursday.This year is shaping up to be even worse, as deadly outbreaks continued to sweep the globe in 2019. As of mid-November, the number of measles cases countries reported to WHO was three times higher than the number of cases reported at this time last year.This week, officials in Samoa advised the public to hang red flags outside their homes to indicate that they have an unvaccinated family member living there. The flags appear to be a twist on a disease-control practice dating back to the Middle Ages, when people marked homes and businesses affected by the Black Plague.In Samoa, the flags are intended to make it easier for health workers who are going door-to-door and vaccinating a community in the throes of a measles outbreak. At last count, 62 people have died, on an island nation of 200,000 residents. Almost all of those deaths were among young children.Samoa’s story is one sliver of a larger narrative about a measles spike following more than a decade of progress toward eliminating the disease. In 2000, there were roughly 28,000,000 estimated measles cases worldwide. By 2017, that number had fallen to fewer than 8,000,000 cases.Last year, progress ground to a halt.2018 saw nearly 10,000,000 estimated cases of the infectious disease spread around the world.”In other words, we’re backsliding,” warned Dr. Kate O’Brien, director of immunization, vaccines and biologicals at WHO.”There’s been an increase in both the cases and the deaths that have occurred from measles,” she said.In 2018, Albania, Czechia, Greece and the United Kingdom, lost their coveted measles elimination status, meaning they’ve had continuous measles transmissions for more than a year after previously declaring the disease eliminated. The United States, which this year logged the highest number of measles cases in more than two decades, barely clung to its own status. Outbreaks in Brooklyn and New York State that lasted for nearly 12 months threatened to end nearly 20 years of having the elimination designation.

Why measles is rebounding around the worldThe best defense against the measles is the measles vaccine, but despite being safe, effective and in use for half a century, there are still large gaps in immunization coverage around the world.In poorer countries, access to the vaccine is a problem, according to WHO. The vaccine isn’t reaching everyone who needs it, especially in parts of sub-Saharan Africa, which has the greatest disease burden. As it stands, five countries — the Democratic Republic of Congo, Liberia, Madagascar, Somalia and Ukraine — accounted for nearly half of worldwide measles cases in 2018.Richer countries have a different problem.While access to the vaccine isn’t an issue, confidence in the measles vaccine is falling precipitously.”We’re seeing a surge in misinformation around vaccines in general, and in particular, around measles vaccine,” O’Brien said. “This is a very high concern for us, because families, parents, are really vulnerable to misinformation.”In the United States, spreading misinformation about the measles vaccine has been the domain of a group of prominent anti-vaccine advocates who have permeated communities, such as the Orthodox Jewish community in New York and the Somali community in Minnesota, distributing false information claiming vaccines are dangerous.Misinformation about vaccines has similarly proliferated online, largely fueled by the same small group of anti-vaccine advocates. A study published last month in the journal Vaccines, found that 54% of advertisements spreading misinformation about vaccines on Facebook were funded by just two anti-vaccine groups, one of which is led by Robert Kennedy Jr., a known anti-vaccine advocate.”If you’re not somebody who understands where the information is coming from, [it’s difficult] to discern accurate, credible scientific information from misinformation,” O’Brien said. Copyright © 2019, ABC Audio. All rights reserved.

Zara announces launch of its 1st beauty collection
After a year of protests, Portland residents have waning patience for antifa
Children make up 26% of new COVID-19 cases in Colorado
Once a pandemic epicenter, Los Angeles County reports consecutive days of zero COVID-19 deaths
Florida teen accused of rigging homecoming queen vote with mom charged as an adult
Cheney not fighting, but not backing down in face of Trump, Republican backlash