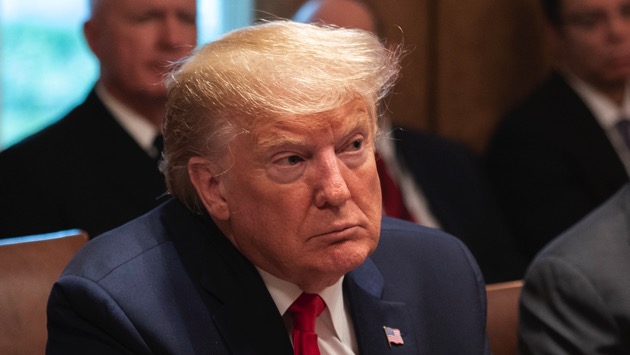 (WASHINGTON) — President Donald Trump tweeted Thursday morning to Democrats that if they are going to impeach him, they should “do it now, fast, so we can have a fair trial in the Senate.”Trump’s tweet came shortly before House Speaker Nancy Pelosi announced that she was instructing House Democratic chairmen to draw up articles of impeachment.

The Do Nothing Democrats had a historically bad day yesterday in the House. They have no Impeachment case and are demeaning our Country. But nothing matters to them, they have gone crazy. Therefore I say, if you are going to impeach me, do it now, fast, so we can have a fair….

Biden has said he won’t testify.Immediately after Pelosi’s announcement, White House press secretary Stephanie Grisham tweeted: “@SpeakerPelosi & the Democrats should be ashamed. @realDonaldTrump has done nothing but lead our country – resulting in a booming economy, more jobs & a stronger military, to name just a few of his major accomplishments. [USA flag emoji] We look forward to a fair trial in the Senate.”A top White House official said on Capitol Hill Wednesday that President Trump is demanding a full trial featuring live witnesses in the Senate chamber if and when the House sends over articles of impeachment to the Senate later this month.After he arrived at the White House from his trip to London, President Trump tweeted late Wednesday night about his July 25 call with Ukrainian President Volodymyr Zelenskiy…Trump tweeted that when he told Zelenskiy, “I would like you to do us a favor though” that the “us” referred to the United States.

When I said, in my phone call to the President of Ukraine, “I would like you to do US a favor though because our country has been through a lot and Ukraine knows a lot about it.” With the word “us” I am referring to the United States, our Country. I then went on to say that……

House Democrats have alleged that Trump was asking Ukraine to investigate his political rivals for his own personal political benefit – not for the benefit of the United States.When Trump last night noted that he brought up the U.S. attorney general, he neglected to mention that he later told Zelenskiy he wanted him to speak not only with U.S. Attorney General Bill Barr, but also with his own personal lawyer, Rudy Giuliani.Copyright © 2019, ABC Audio. All rights reserved.