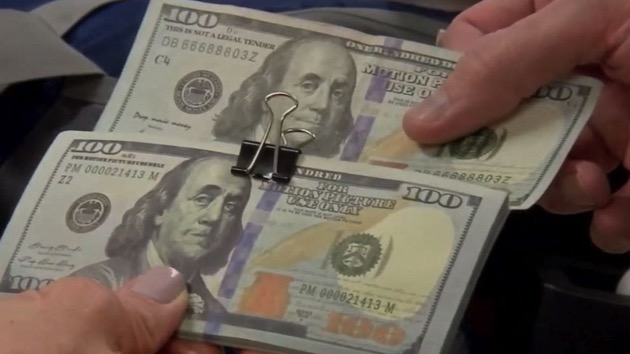 (HOUSTON) — At a time when high-tech scams are running rampant, police in Houston are warning residents to be aware of a low-tech swindle after a college student was cheated out of her iPhone by a scammer using a stack of phony cash known as “movie money.”Tamara Malone was looking to sell her iPhone XS Max, so she listed it for sale on the Letgo app, the college student told Houston ABC station KTRK.A woman in her 20s responded to the listing and Malone agreed to meet her at a Starbucks, Malone said.Malone handed over the phone and the woman handed Malone a bank envelope with $700 in cash, then quickly disappeared. But when Malone examined the bills, she discovered the cash was actually “movie money” — fake bills used as props by filmmakers.The bills look real from a distance, but up close there are tell-tale signs that they’re fake.”If you look closely, it says ‘Motion Picture Use Only’ and ‘In Copy We Trust,"” Detective Shane McCoy of the City of Southside Place Police Department told KTRK.

At 10-police have a warning about a fake cash suspect who could be looking to trick more people this holiday season. Hear from a college student who was duped with this “movie money.” #abc13 pic.twitter.com/1MBwYI4wk0

McCoy said that someone else turned in a stack of movie money to the police department three months ago, but police don’t know if there’s a connection to these bills. Nevertheless, authorities are warning Houston residents to be on the lookout for phony cash when selling items.”Do your homework when you’re selling,” he told KTRK. “Try to get an idea of who you’re talking to. See if they’ve bought things before that you can document. Meet in a place with cameras.”As for Malone, she says she’d like to have her $700 back.”A very expensive lesson learned,” she said. “I should have paid more attention to detail.”Copyright © 2019, ABC Audio. All rights reserved.