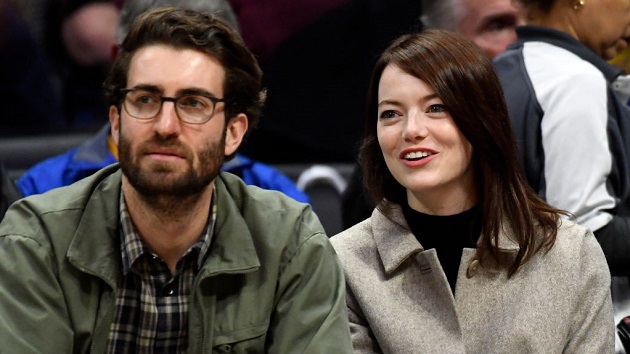 The photo, which is captioned with a single double pink heart emoji, features the smiling couple as Stone shows off a large ring on THAT finger.

The couple has been notoriously private about their romance since they first started seeing each other. Unlike most modern celebrity couples, the two never documented their relationship on social media nor were they often spotted together.

McCary uses his Instagram to mostly promote his work and has set his Twitter to private while the Oscar-winning actress has shunned social media entirely.

Beyond that, the ultra-private couple made their first public appearance at the Screen Actors Guild Awards in January 2019.

As for their official engagement announcement, it received the well-wishes from Billie Jean King, whom Stone played in the 2017 film Battle of the Sexes.  The tennis pro sweetly wrote, “Congratulations to two of the most wonderful, loving, and creative people we know. Ilana [Kloss] and I are so happy for you!”

It is unknown when Stone and McCary will take a walk down the aisle.

Trump targets Biden’s mental health in debate lead-up, despite aides’ efforts to raise expectations
What America owes: How reparations would look and who would pay
Between the economy and coronavirus pandemic, Biden keeps his advantage nationally: POLL
Woman charged with felony in Breonna Taylor protest hit-and-run
California, Nevada likely seeing increase in COVID-19 cases due to Labor Day, officials say
After brain-eating amoeba found in county’s water supply, advisory lifted in all but 1 area