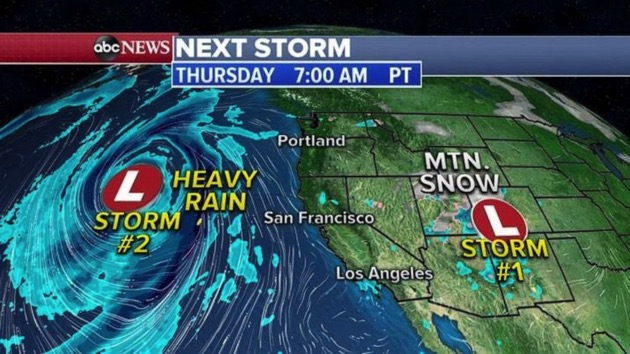 (NEW YORK) — Wednesday’s storm in Southern California has moved out of California and into the Rockies, with heavy snow this morning.The storm has brought more than 3” of rain from San Bernardino County to San Diego County. Downtown Los Angeles recorded more than 1” of rain, causing lots of traffic and some accidents on the slick Southern California roads.In Burbank yesterday, more than a half an inch of rain fell in just 15 minutes. Some road flooding was reported.Rain also fell in the Las Vegas desert, where 0.34” added to the annual rainfall — making it the wettest year there since 2005.This storm is now moving into the Rockies with heavy snow forecast from Utah to Colorado. But a new storm is already lining up in the Pacific to hit the West Coast tomorrow.This new western storm will begin to bring heavy rain and mountain snow to the West on Friday morning, along the Northern California and Oregon coasts. It will move into the San Francisco Bay area by Friday late afternoon and evening, just in time for rush hour.By Saturday, the storm system will move right next to the West Coast, spreading rain and snow further south and inland, with rain reaching Southern California including Los Angeles and San Diego. Heavy snow is expected in the Sierra Nevada, the Cascades, and the Northern Rockies.The heaviest rain with this storm system will be in Northern California, where over the weekend we could see more than 4” of rain, along with possible flooding and mudslides. In the mountains, especially in the Sierra Nevada range in California, up to 3 feet of snow is possible, and Interstate 80 could be treacherous in the higher elevations this weekend.Copyright © 2019, ABC Audio. All rights reserved.