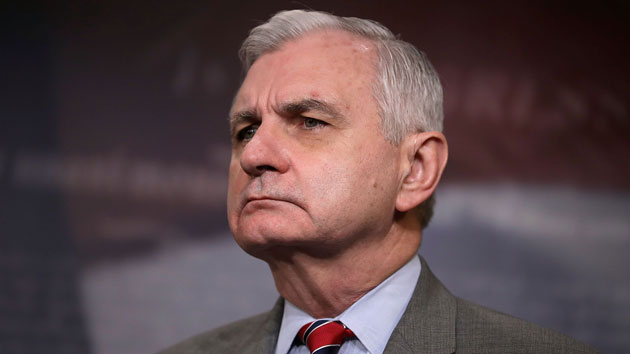 (WASHINGTON) — A key Democratic senator said Tuesday that President Donald Trump did a “serious disservice” to military members by pardoning several servicemen accused, or convicted, of war crimes last month.Sen. Jack Reed, D-R.I., took the opportunity during a Senate Armed Services Committee hearing focused on privatized military housing Tuesday to express his “deep concern about the president’s recent interference in war crimes cases.””The president has the power to pardon, but he has the responsibility to use that power wisely, not recklessly,” said Reed.”Some have claimed that these cases were a distraction and that the president’s intervention have somehow improved morale of the military,” he added. “On the contrary, President Trump’s disregard for our military justice system risked undermining the confidence of our service members and the rule of law and their chain of command, especially those who are courageous enough to bring allegations of war crimes to light, and testify against their teammates.”Last month, Trump pardoned Army 1st Lt. Clint Lorance, who was serving a 19-year sentence for ordering his men to fire on three Afghans, and Army Maj. Mathew Golsteyn, who had been awaiting trial after pleading not guilty to murdering an Afghan man.A broader controversy followed when Trump restored the rank of Navy Chief Petty Officer Eddie Gallagher, who had been convicted in the military justice system of posing with the corpse of an ISIS fighter but acquitted of murder.Trump later ordered the Navy to allow Gallagher to keep his status as a SEAL after news broke the Navy was reviewing whether he should keep the Trident pin that identified him as such.Gallagher’s case led to the firing of former Navy Secretary Richard Spencer, whom Defense Secretary Mark Esper had accused of going behind his back to broker a deal with Trump on Gallagher’s SEAL status.Col. Dave Lapan and Dr. Kyleanne Hunter, both retired Marines, and retired Navy Cmdr. Kirk Lippold, were critical of Trump’s decision to pardon the service members on Sunday’s “This Week with George Stephanopoulos.””When the military becomes politicized, nothing good can come of it for long-term health of the military,” said Hunter, who served as a Cobra pilot in multiple deployments.”This president has often talked about how much he admires the military, how much he has done for the military; it’s all about the strength of the military” said Lapan. “And I’d ask what these pardons have done to further that goal, rather than making the military stronger, I think he’s weakened the military in these days.”Lapan, a Marine Corps veteran who served in Afghanistan, Iraq and Haiti, disagreed with Trump’s characterization in a tweet in October that said, “We train our boys to be killing machines, then prosecute them when they kill.””It was an inappropriate statement,” said Lapan. “I think when you say something like that, the president is not fully grasping that they are professionals, that they do have a set of standards and rules that they need to follow.”At Tuesday’s hearing, Reed invoked a statement by the late Sen. John McCain.”This is a moral debate. It is about who we are. I don’t mourn the loss of any terrorist’s life,” Reed said, quoting a McCain column from 2011 following the death of Osama bin Laden. “What I do mourn is what we lose when by official policy or official neglect we confuse or encourage those who fight this war for us to forget that best sense of ourselves.”Through the violence, chaos and heartache of war, through deprivation and cruelty and loss, we are always Americans, and different, stronger and better than those who would destroy us,” he continued, before switching back to his own thoughts. “That is the standard we should demand from our military men and women, and I believe the president’s interference in these cases has done them a serious disservice.”Copyright © 2019, ABC Audio. All rights reserved.