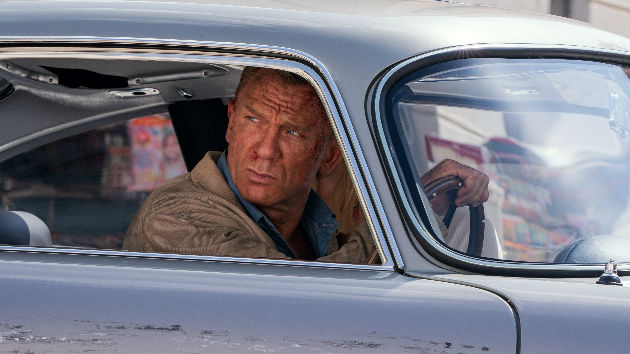 (NEW YORK) — The anticipated first trailer for No Time to Die, the 25th James Bond adventure, made its debut on ABC’s Good Morning America Wednesday morning, with the film’s cast on hand as well.

The trailer shows Daniel Craig as an apparently retired James Bond being pressed into service by his old CIA pal Felix Leiter, again played by Jeffrey Wright. It seems a baddie called Safin, played by Bohemian Rhapsody Oscar-winner Rami Malek, has access to a game-changing terrorist weapon, and super-spy Bond gets back into the action to take him out.

Along the way, Bond runs into Lashana Lynch’s Nomi, who apparently has inherited his 007 codename in his absence. “Get in my way and I’ll put a bullet in your knee,” she warns him. “The one that works.”

“License to kill. History of violence. I could be speaking to my own reflection,” Safin says.

And as one might expect, there’s no shortage of action in the trailer, with running and gunning by Lynch and Bond, James’ armored Astin Martin DB5 taking out hordes of henchmen thanks to machine guns hidden in each headlight, and Craig pitching himself off a towering bridge, suspended only by a single rope.  Is it any wonder he always gets hurt on these movies?

New storm system to travel across the South this weekend
Black Friday 2020: Tips on the best deals to look out for
Michael Jordan donates $2M of proceeds from “The Last Dance” to food banks
Scientists, students demand action to keep Arecibo radio telescope operating
How to help food banks this Thanksgiving as COVID-19 deepens demand
Denver mayor offers apology for Thanksgiving travel after urging residents to stay home