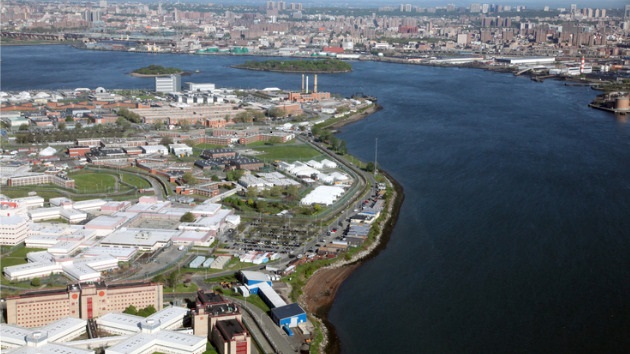 (NEW YORK) — Four correction officers, including a captain, at New York City’s Rikers Island jail were suspended and accused of “extremely troubling” behavior after they allegedly stood by for seven minutes watching an 18-year-old inmate attempt to hang himself, authorities said. The inmate tried to take his own life on Thanksgiving Day at the jail’s George R. Vierno Center with a piece of clothing as the jailers looked on before intervening, officials said.”The claims being made here are extremely troubling and we are taking them seriously,” Cynthia Brann, commissioner of the New York City Department of Correction, said in a statement. “The safety and well-being of those in our custody is our number one priority and an investigation into this incident is underway. Three officers and one captain have already been suspended and if the outcome of the investigation warrants we will take appropriate disciplinary action up to and including termination.”The names of the suspended correction officers were not immediately released.Brann said the incident, which occurred at about midnight Nov. 28, was referred to the city’s Department of Investigation to conduct an independent inquiry.The teenage inmate, identified by the city’s Legal Aid Society as Nicholas Feliciano, was placed at Rikers Island on Nov. 18 after he was arrested on a parole violation.The 18-year-old attempted suicide shortly after being removed from the general population after getting into a fight, officials said.Feliciano was in a medically-induced coma Wednesday morning and remains under guard in the intensive care unit at Elmhurst Hospital in Queens, according to the Legal Aid Society, which has assigned a defense attorney to represent him.The Legal Aid Society said Feliciano has a history of mental health problems and suicide attempts.”Nicholas’ tragedy illustrates the dangers and horrors of relying on our broken parole and correctional systems to address a mental health crisis,” the Legal Aid Society said in a statement released on Wednesday. “Despite his young age and known mental health history of past suicide attempts, Nicholas, who is 18 years old, was remanded to New York City jails – a system with a poor track record of managing suicide risks during incarceration – on allegations that have so far resulted in no criminal charges.”Feliciano’s doctors and the Legal Aid Society’s Parole Revocation Defense Unit are calling on the state Department of Correction and Community Supervision to release him from custody due to his critical condition and immediately dismiss the parole violation.”These constraints have already exacerbated his family’s grief and anxiety around this tragedy,” the Legal Aid Society’s statement reads.”This outcome underscores the New York City Department of Correction’s inability to safeguard the youngest people in its custody,” the statement reads. “It represents a colossal failure of supervision and leadership, one for which we demand answers before another New Yorker leaves the New York City jails in critical condition.”The incident comes about two months after the New York City Council approved a plan to shut down Rikers Island, an 87-year-old, 400-acre lockup in New York City’s East River. Rikers is the world’s largest jail, housing roughly 7,000 inmates on any given day.The jail is expected to be shuttered by 2026 and replaced with four smaller jails to be built an at estimated cost of $8 billion closer to the city’s main courthouses in the boroughs of Manhattan, Brooklyn, the Bronx, and Queens.”Rikers Island is a symbol of brutality and inhumanity and it is time for us to once and for all close Rikers Island,” New York City Council Speaker Corey Johnson, a Democrat, said after the council voted to close the jail. “As a city we must do everything we can to move away from the failed policies of mass incarceration.”Copyright © 2019, ABC Audio. All rights reserved.