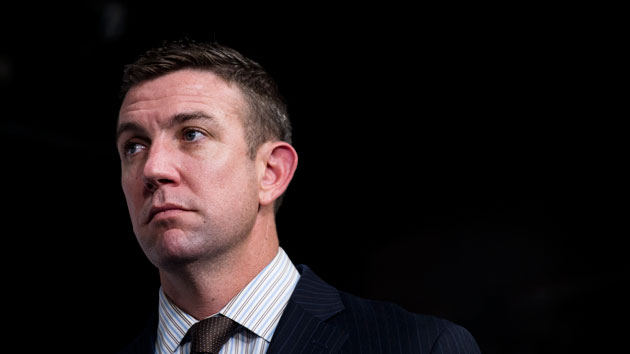 (SAN DIEGO, Calif.) — California Republican Rep. Duncan Hunter pleaded guilty Tuesday to one count of conspiracy in a case surrounding his alleged misuse of $250,000 in campaign donations for personal expenses such as family vacations and oral surgeries.He once called the investigation a politically-motivated “witch hunt.”Hunter, 42, succeeded his father in representing the state’s 50th Congressional District, which includes parts of San Diego and Riverside County, in 2008. The younger Hunter narrowly won his re-election race in 2018 after being indicted, along with his wife, Margaret on dozens of charges of improperly using campaign funds.Hunter also allegedly tapped into some of that money to also finance romantic trysts with multiple congressional aides and lobbyists, according to federal prosecutors in new court filings.Hunter told KUSI in an interview that aired on Monday he decided to plead guilty for the sake of his children.“I think it’s important not to have a public trial for three reasons, and those three reason are my kids,” Hunter said. “I think it’d be really tough for them, it’s hard enough being the kids of a public figure, and I think it’s time for them to live life outside the spotlight.”A district spokesman for the congressman said that Hunter will discuss “next steps with Republican leadership in DC.”Hunter, during the KUSI interview, stressed what he sees as the importance of keeping the congressional seat red.Hunter won with nearly 52 percent of the vote in 2018, narrowly beating out Democratic newcomer Ammar Campa-Najjar by three points. A string of controversial attack advertisements against Campa-Najjar also grabbed the national spotlight. One ad called called him a “security risk” because of his Palestinian family connections.“Today is a sad day for this district because no constituent hopes to see their congressman plead guilty to corruption. But today is also a day filled with opportunity because it’s the first time in years people, not political scandals, will come first again,” Campa-Najjar said in a statement.Hunter’s two main Republican opponents, former California Rep. Darrell Issa and radio host and former San Diego City Councilman Carl DeMaio also praised Hunter’s decision to resign.“Though his misuse of campaign funds was clearly wrong, I wish him and his family the best as they address the matters ahead of them,” Issa, the former chairman of the House Oversight and Government Reform Committee said in a statement Monday.Hunter is due to be sentenced in March. His wife, Margaret, who was also charged in the case and pleaded guilty on a single corruption count, is slated to be sentenced in April.Hunter’s move opens up the possibility of another special election in California, in addition to the one set to take place in the state’s 25th Congressional District, where Democrat Rep. Katie Hill resigned from Congress amid multiple scandals.The Democratic Congressional Campaign Committee called on its GOP counterpart to return the $220,000 in contributions Hunter donated to the National Republican Congressional Committee.”We know House Republicans are strapped for cash. But they’ve hit a new low by pocketing dollars from a Congressman who just pled guilty to federal corruption charges. If Minority Leader McCarthy and his campaign-arm choose to keep Hunter’s checks, Hunter won’t be the only Washington Republican misusing campaign funds,” DCCC spokesperson Robyn Patterson said.The seat has been represented by either Hunter or his father since 1980. The district, one of the last Republican areas remaining in Southern California, could now be more vulnerable to a Democratic takeover.Hunter was the second House member to endorse then-candidate Donald Trump in 2016. He now joins another early Trump supporter, former Rep. Chris Collins of New York, in pleading guilty to criminal charges, after claiming his prosecution was politically motivated.“I did make mistakes,” Hunter told KUSI “I justify that plea with the understanding that I am responsible for my campaign and what happens to my campaign money. Whatever my time in custody is, I will take that hit. My only hope is the judge does not sentence my wife to jail, I think my kids need a mom in the home.”Copyright © 2019, ABC Audio. All rights reserved.