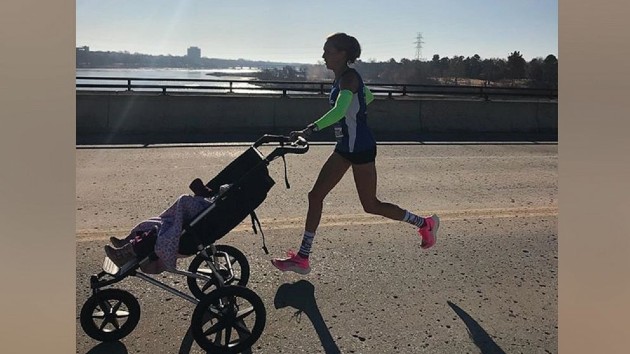 (TULSA, Okla.) — An Arkansas mom of three is expected to become a world record holder after running a half marathon in 1 hour, 21 minutes and 23 seconds.The mom, Julia Webb, ran the Route 66 Half Marathon in Tulsa, Oklahoma, on Nov. 24 while pushing her youngest daughter, 10-month-old Gabby, in a stroller.Webb, 36, of Little Rock, also won the female division of the half marathon, besting her nearest competitor by two minutes.Webb had her husband, a running coach at the University of Arkansas, take photos and videos of her throughout the half-marathon in order to provide evidence to Guinness World Records that she ran the whole Route 66 race with a stroller.A spokeswoman for Guinness World Records confirmed to ABC News that Webb has submitted an application for the Guinness World Records title “fastest half marathon pushing a pram (female).” Her application will be reviewed and ruled on within the next 12 weeks, according to the spokeswoman.The current world record in the category stands at 1 hour, 27 minutes and 34 seconds, according to the Guinness World Records’ website. It was set by a mom, Lindsy James, in the U.K. in 2016.Webb, a collegiate runner, suffered an injury when she was pregnant with her oldest daughter and wasn’t sure if she would be able to keep running at a competitive level. She did recover and then began to train with her daughter in her stroller, a tradition she continued with her next two children.”That’s how I started running with my kids, with strollers, so I thought it’d be fun to get out there and inspire other moms,” said Webb. “I hope I encourage moms to get outside and to continue to do what they love.”In addition to Gabby, Webb is also the mom of a 4-year-old and a 7-year-old, both girls.As Webb awaits the decision from Guinness World Records, she is focusing her sights on her next goal, running in the 2020 U.S. Olympic Team Trials – Marathon in Atlanta in February.Webb said she qualified for the trials during a marathon she ran while around five weeks pregnant with Gabby.”Some women might fear that if they have children it will hinder their ability to accomplish goals, but I really believe if it’s something you love to do you can involve your whole family in it,” she said. “If I didn’t have running I wouldn’t be as good of a mom. The more I compete, the more joy I get and the more joy it brings to my children.”Webb also shared some stroller running tips that any parent can use, whether they’re an elite runner like Webb or just like going out for a stroll in the neighborhood.”I see a lot of people trying to push the stroller with both hands and I think it’s best to push with one hand so you can use your other arm to help you run more efficiently,” she said. “And don’t overthink it.””I bring snacks and my phone in case I get a flat tire but other than that just get out and enjoy yourself out there,” Webb said. Copyright © 2019, ABC Audio. All rights reserved.

WATCH: NBA, WNBA prepare for epic 2020 Finals
Chrissy Teigen reveals she was hospitalized for pregnancy complication
Jamie Chung says ‘Big Hero 6 The Series’ shows kids “you don’t need powers to be a superhero”
Coronavirus live updates: ‘We’re not in a good place,’ Fauci warns
Frankie Muniz and wife Paige Price announce they have a “little miracle” on the way
After her child died in a tip-over accident, mom makes desperate plea to parents