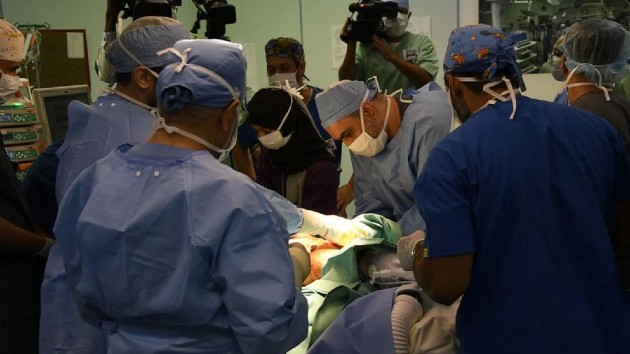 (NEW YORK) — For the last 30 years, Dr. Abdullah al-Rabeeah, a pediatric surgeon and adviser to the Saudi Royal Court, has spearheaded a program that separates conjoined twins who were born to poorer families from around the world. In November, he successfully completed his 48th surgery on a set of conjoined twins, Ahmed and Muhammed, from Libya. Al-Rabeeah has separated so many children that even his identical, non-conjoined twin daughters speculated he might have operated on them. “When (my twins) were three or four — I can’t remember — they were seeing in the news that I was separating twins. So they asked their mother, ‘Mom, when did dad separate us?"” he said, laughing. ‘Based on science and humanity’ Housed at the King Abdullah Specialist Children’s Hospital in Riyadh, al-Rabeeah’s program receives much of its funding from royal and Islamic charities. Saudi Arabia’s King Salman and Crown Prince Mohammed bin Salman approve each individual operation with the Saudi government footing the bill. “We pay for the travel and expenses,” al-Rabeeah told ABC News about the patients who have come from 21 countries. “It has nothing to do with geography, religion or politics. It’s based on science and humanity.”Al-Rabeeah first operated on conjoined twins in the early 1990s. As his practice grew, he also rose in the ranks of the Saudi government serving as health minister and director of the King Salman Humanitarian Aid and Relief Centre. As his public service portfolio increased, he still made time for his medical program for conjoined twins. “Even when I was minister of health, I continued to do my surgeries because I believe even if I do it on the weekends, it is something (that) can help people. Humanity is part of medicine,” he said. While many scientific journals have not reported on the program, al-Rabeeah says his program has separated nearly 100 patients, with 90 still living as of 2019. ‘Siamese Twins’ Conjoined twins are rare. According to researchers from the University of Minnesota, the phenomenon is only found in about 1 in 200,000 births. Occurrences are higher in Southeast Asia and Africa, where the rate is 1 in 25,000, because of an increased rate of identical twins. Arguably, the most famous conjoined twins were Chang and Eng Bunker, who lived during the 19th Century. Born in Thailand, they moved to the United States and the pair eventually toured the carnival circuit popularizing the term “Siamese twin.”Dr. Oren Tepper, director of Craniofacial Surgery at Montefiore Health System in New York City who has operated on three twins conjoined at the head, said the decision to separate is dependent on “what vital structures are shared.””When they share (vital structures), you can’t simply just separate them,” he told ABC News, “they need to be able to tolerate being independent.” Separation surgery methods depend on each patient.