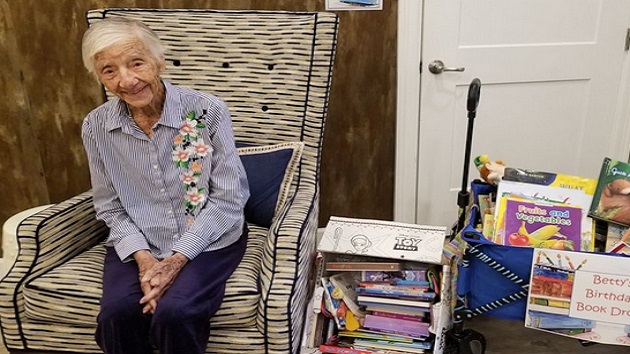 (BUDA, Texas) — As Betty X. Davis was preparing to mark her 104th birthday Monday, her family and caregivers asked what she wanted to celebrate her monumental birthday.Davis, of Buda, Texas, told them she didn’t want a cake or presents. Instead, she wanted to hold a book drive to collect 104 children’s books to donate to a local elementary school. “That’s very important I think, to get kids [at an early age] to read a book,” Davis told “Good Morning America.” “There’s a lot you can do with books.”Davis’s caregivers at Sodalis Buda Assisted Living & Memory Care threw a birthday party for her on Monday. There at the celebration were four of Davis’ eight children, other friends and family members and some of the more than 120 children’s books that have already been donated.”She told me she didn’t want a big cake or presents and that children’s books were her passion,” said Rachel Grover, life engagement director at Sodalis. “She said children’s books have always had a special place in her heart.”Davis just moved into Sodalis three months ago, having lived on her own up until then in a three-story house, according to her daughter Virginia Palmer.Palmer said a love of reading and a passion for giving back was something Davis instilled in her children, grandchildren and great-grandchildren.”That has always been a very big focus in her life, helping especially children with less resources,” she said. “And she read to us all the time and got us started on all the typical childhood books.”Davis worked with children all her life, not only as a mom but as a public school speech therapist, a job she took on after receiving two master’s degrees.Palmer said she remembers her mom always reading and writing, everything from letters and speeches to books and poems, which she can still recite by memory.Children’s Book Writers and Illustrators wanted to honor her with a big award.Instead, she asked them to create the Betty X. Davis Young Writers of Merit Award. Since then, three writers from Austin area elementary, middle and high schools have been honored each year for their writing abilities.When school is back in session in January, Davis plans to join her caregivers at Sodalis in taking the donated books from her birthday book drive to an in-need elementary school. Grover said children’s books continue to be dropped off at Sodalis by strangers as more people find out about Davis’s wish.”It shows that there is always a need to give back and it doesn’t matter your age — there’s always a way to give back,” Grover said. “There is a whole different light that has been lit here because of Betty and her birthday.”