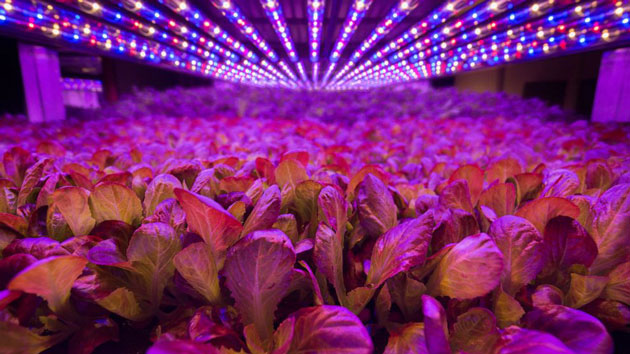 (NEWARK, N.J.) — Normally when we think about farms on the side of a road, we might imagine acres of land, crops and livestock roaming on expanses of grass. AeroFarms, however, is different.Built on the site of a former steel mill on the east side of Newark, New Jersey, the company is paving the way for a new method of farming — one that provides necessary food and nutrients to communities in need while also reducing the burden on the earth’s natural resources and accounting for its changing weather patterns.”This is a 3-and-a-half acre property. The idea that we can convert it to something green and productive, and grow indoors and grow all year round, [and] be able to nourish communities, is really exciting,” Marc Oshima, chief marketing officer for AeroFarms, told ABC Audio for its Thanksgiving special, “America’s Bounty.”AeroFarms was founded in upstate New York but it moved to Newark to be closer to the people it serves. The city is home to four of AeroFarms’ nine locations, and many of its residents are employed at the farms.”We fundamentally want to put the farms where the people are and think about how to be most efficient in that delivery,” Oshima said. “So our selling partners, their warehouses and their distribution facilities are within just miles. And the idea that we’re literally in their backyard, we can really be collaborating closely on understanding what their needs are and be able to grow really efficiently.”With rows upon rows of growing trays 80 feet long and stacked 40 feet toward the ceiling, the farm’s growing room is specially regulated to minimize contamination and provide a stable, consistent environment for crops to grow. People who enter the room must don lab coats, eye protection, gloves, hairnets and even wipe their shoes on a disinfecting mat. Air curtains also help prevent unwanted contaminants from floating into the space.”[All year long] we’re creating the exact same environment to be able to optimize the plants,” Oshima said. “It’s independent of the season, independent of the weather and this is how we can think about — first and foremost — how to create the perfect environment for the plants. And it happens to be a perfect environment for our workers as well.”That optimization of the plants’ growth cycle shows in various ways. For example, Oshima said, baby leafy greens might take 30 to 45 days to grow on a traditional farm whereas they only take 12 to 14 days at AeroFarms.The farm also waters its crops with an aeroponics system — hence the “Aero” in its name — allowing for a more customized watering method that doesn’t involve soil.”When we talk about growing indoors without sun or soil, our growing medium is a cloth that we have patented,” Oshima said. “The cloth gives us a lot of flexibility about what we can grow. We talk about a wide range; over 700 types of products have been grown on the cloth. … So we’re misting the roots with the right amount of water and the right amount of nutrients.”Being indoors, even the lighting system at AeroFarms has been customized to help the plants grow optimally. Oshima said their lighting system works with sensors and has been designed to “achieve more effective photosynthesis indoors than outdoors.””This is a way of growing that uses 95% less water [and] no pesticides. But at the same time, because of that faster growing cycle [and] our ability to grow all year round, there’s no competition — no weeds,” Oshima said. “This is a way of growing that has 390 times more productivity per square foot than a field farm.”And the produce not only feels fresher than what you’d normally buy, but it tastes better too. Oshima said that consumers who tried AeroFarms’ kale — part of its “Dream Greens” brand — during a demo were “dancing in the store” after trying the food. “This is typically a low-involvement category,” he added.Oshima, who said he was raised in New Jersey, said he appreciates the “rich history of agriculture” in the state and that AeroFarms has been working with the U.S. Department of Agriculture and the New Jersey Department of Agriculture to see how they could align their interests.”There’s a great history of ‘Jersey Fresh,’ and that’s what we’re celebrating,” Oshima said. “We can think about that not for the summer but for all year round.”Copyright © 2019, ABC Radio. All rights reserved.

Ilyasah Shabazz says ‘The Godfather of Harlem’ is “great,” but didn’t show the “depth” of her father Malcolm X
Shannen Doherty on her battle with stage 4 breast cancer: “I’ve got a lot of life in me”
Presidential debate live updates: Trump vs. Biden and what you need to know ahead of first matchup
Coronavirus live updates: US state sees record rise in daily cases over last two weeks
AG never asked grand jury to consider homicide charges in Breonna Taylor’s killing
Windy, dry, hot weather to continue in parts of California