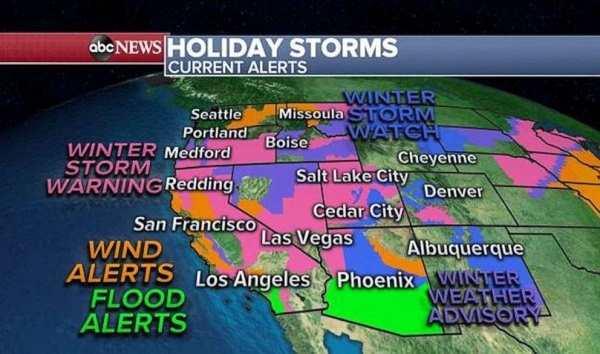 (NEW YORK) — A remarkably turbulent weather pattern continues to dominate almost the entire U.S. Alerts from 2 major storms span all the way from California to New York affecting at least 140 million Americans.Major cities across the country including Los Angeles, Chicago, Las Vegas, Minneapolis, and Louisville are incurring significant weather impacts on one of the busiest travel days of the year.The first of 2 Major Storms this week is now in the upper Midwest and is headed towards the Great Lakes this morning.Over 30 inches of snow was reported in parts of Colorado from this storm. Nine to 10 inches of snow were reported in both Nebraska and Kansas. 8 inches of snow have already been reported in parts of Iowa and Minnesota this morning.Wind gusts in Illinois, Iowa, Kansas, Missouri, and Arkansas have reported gusts over 50 mph. This storm also caused 4 reported tornadoes — 2 of them in Louisiana and 2 in Mississippi.This storm will bring snow totals up to 7 inches in the Minneapolis area this morning and gusts to 60 mph through the Midwest, including Chicago. This will cause travel delays at airports in the Midwest.The good news with the first storm is that is moving off towards the east and is beginning to lose its strength and organization. While the snow and rain impacts will begin to wind down as it heads to the northeast, there could be snow showers and rain showers tonight and into tomorrow for the Northeast.The more impactful weather will be the strong gusty winds with the storm that will ramp up overnight in the northeast cities and peak during the morning hours on Thanksgiving. This could have impacts on parades in the northeast U.S.Simply put, the second storm on the West Coast of the U.S. is a beast. The storm set numerous records overnight, including November low pressure records in both Oregon and California.A preliminary all-time low pressure record was set for the state of California (973.6 mb). Low pressure indicates the power of a particular storm. However, pressure comparisons on different parts of Earth are not appropriate.Waves were reported to be 34 feet on Tuesday evening offshore. A wind gust of 106 mph was reported at Cape Blanco, Oregon.This morning, the storm is beginning to weaken but it is still bringing major and severe impacts to the western U.S. Wind gusts today in the west coast could be over 50 mph. Heavy rain is heading for Los Angeles where locally 1 to 4 inches of rain could cause debris flows and flash flooding through Friday. Locally, over 3 feet of snow is possible in the mountain ranges of California and Nevada. This includes the mountains in Southern California.On Thanksgiving, long duration snow will occur across the Rocky Mountains on Thanksgiving and part of Friday. Locally 1 to 3 feet of snow is possible in parts of the Rocky Mountains.The second storm will intensify as it moves east of the Rockies and strong thunderstorms with more severe weather is possible across the Southern Plains on Friday.This storm will eventually reach the Northeast U.S. and there is increasing potential it will bring some impact. While we are gaining confidence of some weather impact in the Northeast by Sunday evening and Monday morning, the magnitude and exact location and timing remain uncertain.However, it is appearing more likely that snow and rain will occur in the Northeast U.S. Sunday night and Monday and it will likely bring travel delays.And, as mentioned, we are tracking another storm that will like move into the West Coast as well later this holiday weekend.Copyright © 2019, ABC Radio. All rights reserved.