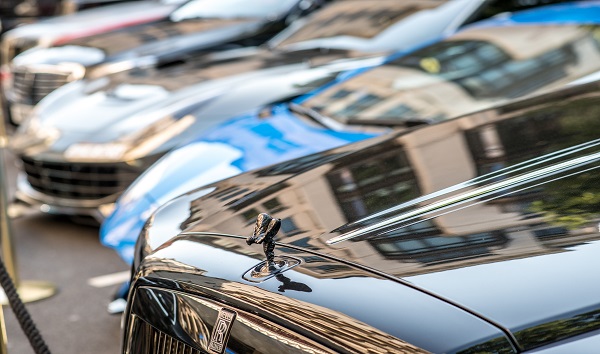 (NEW YORK) — Rolls-Royce, the centenarian ultra-luxury British automaker, just got a lot more hip.The company, with its headquarters in bucolic Goodwood, England, opened a new chapter in its storied history last year when it launched its Cullinan SUV. The $330,000 vehicle was so successful that the company was forced to add another shift at its plant to keep up with demand. The Cullinan, which was developed in part to attract younger buyers, also helped Rolls-Royce to achieve record sales in 2018, with more than 4,100 vehicles sold.This month, the 113-year-old marque took another step to shed its staid reputation: It debuted the Black Badge Cullinan, a $382,000 SUV that offers greater power from its 6.75-liter, twin-turbo V12 engine (600 horsepower versus 571), added torque (664 versus 627) and a re-engineered drivetrain and chassis for a sportier, more aggressive ride.”The Cullinan is taking volume away from traditional models like the Phantom and Ghost,” Philippe Houchois, an automotive analyst at Jefferies, told ABC News. Houchois is forecasting 2019 sales of 4,600 units, with the Cullinan accounting for more than half of production.The Black Badge series, now available in all five Rolls-Royce models, was introduced in March of 2016 and was designed “for the taste of a younger generation of luxury customer,” according to the company. In addition to the enhanced performance and higher cost, Black Badge models have a “bold and darker” look, with high gloss black chrome on the Spirit of Ecstasy, grill, trunk handles and side frame finishers.The exhaust pipes are also darkened and Rolls-Royce’s silver and black badges are inverted. The Cullinan edition gets Rolls-Royce’s first-ever colored brake caliper and new 22-inch forged alloy wheels.One in 5 Rolls-Royces sold in the U.S. are Black Badge. But that number could increase to 1 in 4 with the Black Badge Cullinan, according to a Rolls-Royce spokesman.”The company has always been a British, stiff-upper-lip brand,” Eric Minoff, a senior specialist and head of sales at Bonhams auction house, told ABC News. “For a majority of its history it tried to focus exclusively on aristocratic luxury cars for people of supreme wealth. It’s now appealing to a certain sect of young, moneyed people.”The average age of a Rolls-Royce buyer has fallen from 60 to 40 in the past decade. Houchois said rich Chinese in their 30s who seek out premium, exclusive brands are behind the trend.”There is extreme wealth at a young age in China,” he said.Minoff said the shift to millennials and younger owners started when Rolls-Royce expanded its product lineup to include the Wraith, a coupe, and the Dawn, a convertible.”Rolls was limited in its number of models for a long time,” he said. “The Wraith definitely pushed down the age of the customer.”Like its competitors, Rolls-Royce was smart to change gears by altering its business strategy, he pointed out.”Rolls, Aston Martin, Bentley, Lamborghini — they’re going to give people what they want,” he said. “They’re a business. If customers want SUVs, that’s what they’ll produce. The objective is to sell cars.”Torsten Muller-Otvos, CEO of Rolls-Royce, said affluent younger Americans, not just Chinese, are placing orders for the company’s vehicles.”It’s the company’s duty to lure younger customers to the brand,” he told ABC News in August. “We’re seeing a lower age group across the range — Phantoms, too.”He added, “People understand the quality is excellent. We don’t need to prove ourselves anymore.”Mark Takahashi, senior reviews editor at Edmunds, said wealthy drivers under the age of 40 care more about the environment than performance and chrome. Instead, Rolls-Royce could broaden its appeal with zero-emissions vehicles and non-animal leather interiors, he argued.”I am not fully sold on Black Badge — it feels a little contrived,” he told ABC News. “Rolls can chase after young markets with hybrids or full electrics. A lot of young people want greener cars.”Muller-Otvos said Rolls was already committed to electrification, with an EV coming in the next decade.”Electric is the right way,” he noted. “It’s a logical route for us. But you’ll have to ‘wait and see’ what an electric Rolls-Royce looks like.”The high price tag and gas-guzzling engine of the Black Badge Cullinan, Rolls’ latest status vehicle, will not turn buyers away, Minoff said.”Cars are one of the only ways to show off how much money you have wherever you go,” he said. “Rolls-Royce is an incredibly powerful brand.”Copyright © 2019, ABC Radio. All rights reserved.