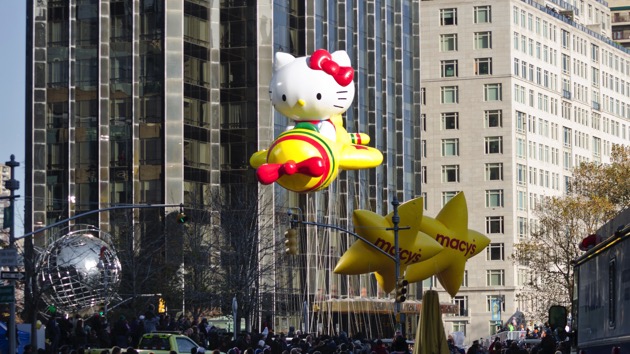 (NEW YORK) — The fate of the giant character balloons in the Macy’s Thanksgiving Day Parade is still up in the air.New York Police Department Chief Rodney Harrison said Tuesday that the decision on whether or not to fly the balloons will be a “game day decision.”Possible high wind gusts have been a cause of concern and could potentially cause the rare event of not flying the giant balloons, a staple of the famous parade.Wind speed devices will be used to determine which balloons can soar at what height. Each of the 16 giant character balloons has a risk profile depending on the size and weight.Harrison noted that because people from all around the world come to New York City for the parade, “safety is paramount.”He added that he’d like to make sure the show can go on in some form despite wind in the forecast.A Macy’s spokesperson said in a statement Monday that it was “too early to make any determinations regarding the flight of the Parade’s giant balloons.” However, the spokesperson said “the parade takes place rain or shine.”‘We have a number of weather operations in place, which include continuous monitoring of conditions on site by a licensed meteorologist, who is also in direct communication with the National Weather Service,” the spokesperson said.Based on the city’s guidelines, the giant character balloons will not operate when there are sustained wind conditions exceeding 23 mph and wind gusts exceeding 34 mph on the route, according to the spokesperson.Wind gusts could climb to over 35 mph in the Northeast Wednesday night and Thursday morning, as a storm moves across the country.The giant balloons have been grounded only once before, in 1971, due to extreme wind conditions. Copyright © 2019, ABC Audio. All rights reserved.