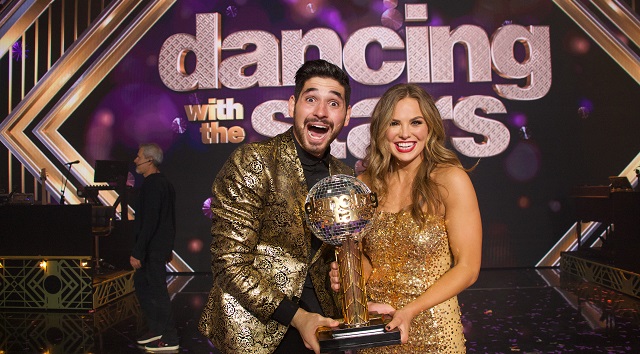 (NEW YORK) –Hannah Brown, the only finalist to avoid the bottom two this season, was named champion of Dancing with the Stars season 28 on Monday night.

“I am really thankful for everything that the judges had critiqued me on so that I just had a fire tonight to really bring my A game,” The Bachelorette star disclosed to ABC Radio. ” I am really thankful for the fans for voting for us and for supporting us along the way.  It’s just, this is my happy ending.  My dream come true.”

Brown, and her pro partner Alan Bersten, established themselves as the couple to beat during the first episode.  However, as the pressure built throughout the season, Hannah found herself struggling with self doubt and even opened up on Instagram a few weeks ago that the show left her in an emotional slump.

Monday night proved that Hannah’s confidence issues were a thing of the past as she stunned with a victorious freestyle to a mashup of Alicia Keys’ “Girl on Fire” and Gwen Stefani’s “Hollaback Girl.”  A particular thrilling moment had Alan flipping his dance partner over his head in a near-cartwheel.

That routine also earned Brown her first perfect score of the season, capping off her DWTS journey with an overall final total of 58/60.

In addition to a freestyle, the finalists were tasked to reprise their favorite dance of the season.  For Brown, she chose her romantic Viennese waltz to Taylor Swift’s lover.  The dance also served as juicy foreshadowing for the upcoming season of The Bachelor, as it was revealed that Brown has a role to play in the upcoming season and possibly compete for Bachelor Peter Weber’s heart.

Another finalist ended her season with another perfect score, former Fifth Harmony member Ally Brooke.  She chose to reprise her jive to Tina Turner’s “Proud Mary” — a dance that served as a symbolic turning point for her self-confidence.  Ally stunned with her electrifying moves, but not as much as her freestyle to Gloria Estefan’s “Conga.”

Both dances earned her perfect 10s.  She finished the season in third place.

“I was made fun of for so long for my dancing and now the tide has turned and people are now complimenting me for my dancing,” She gushed before touching upon something that’s even better than a trophy, “It’s amazing because someone sees me as an inspiration?  That’s the goal.  That’s the gift.”

Another competitor also collected a perfect score on Monday: comedian Kel Mitchell.  He chose to reprise his jazz routine from Disney night, dancing to High School Musical’s “We’re All in This Together.”  He and partner Witney Carson were perfectly in sync, which delighted judges Carrie Ann Inaba, Len Goodman, and Bruno Tonioli — who was also celebrating his 64th birthday on Monday.

Mitchell chose to freestyle to “Jump” by Kriss Kross and, instead of using the pro dancers for his routine, he brought dancers from Chicago to transform his routine into a full blown tribute to his home.  He ambitiously sped up the song toward the end, which delighted the judges as he joyfully kept pace.  However, Goodman broke from Carrie Ann and Bruno and handed him a nine in comparison to their 10s, which gave him a final total of 59/60.  He was also named the season’s runner-up.

Country star Lauren Alaina, who finished fourth with pro partner Gleb Savchenko, reprised her emotional foxtrot to Dolly Parton’s “Jolene,” which earned her straight nines.  However, her freestyle to Luke Bryan’s “Country Girl” finally awarded her her first and only perfect score of the season.

“This entire process has helped me gain confidence,” She told ABC Radio.  “I feel like I improved in everything so I’m really proud”

The night also welcomed superstar Cher, who threw it back to the 60s with her hit “The Beat Goes On,” which featured vocals from her late husband Sonny Bono.  She also dressed appropriately for the occasion with a bright and colorful jumpsuit.

In addition to Cher, the night also welcomed Ne-Yo and Pitbull, who performed a fiery “3 to Tango” as all the season’s past competitors danced one final time together for the song.

Also during the show, it was announced that the Dancing with the Stars Live Tour 2020 will kick off January 9, 2020 in Richmond, VA.  Hannah and Alan, Ally and Sasha, Kel and Witney, plus previously eliminated contestants Kate Flannery and Sailor Brinkley-Cook will all be participating in the tour.

Biden to seek 5-year extension of last nuclear arms pact with Russia
‘The Boys’ is tackling one of the comic’s raunchiest storylines
Priyanka Chopra Jonas says the racism she suffered in high school forced her to leave America
‘The Bachelor”s Sarah Trott explains her sudden exit from the show
Kristen Bell opens up about “struggling” with her mental health, therapy with husband Dax Shepard
New York man who traveled to DC with Proud Boys arrested