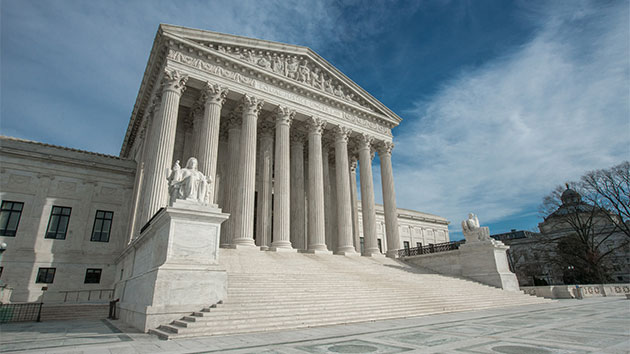 (WASHINGTON) — The Supreme Court has granted President Donald Trump’s request for an emergency stay of a federal court order that his accounting firm comply with a congressional subpoena for financial records.House investigators with the Oversight and Government Reform Committee requested Trump’s records from the firm, Mazars USA, earlier this year but the company has refused to turn them over.The stay means Trump’s records will remain confidential while the justices decide whether to take up the merits of his appeal. Since the court typically doesn’t grant stays of lower court decisions unless it’s inclined to reconsider them, the move could be a positive sign for Trump.”There is a fair prospect the Court will reverse the judgment below,” Trump attorneys wrote in court documents. “The committee’s investigation of the president for wrongdoing is not a legitimate legislative purpose.”Lawyers for the committee say Congress has the constitutional power to obtain information relevant to drafting laws, including stricter presidential ethics rules currently under consideration by Democrats.”Two levels of the federal judiciary have upheld that subpoena as valid and enforceable,” House lawyers wrote in court documents. “Each concluded that the Committee issued the subpoena in furtherance of a valid legislative purpose and that the subpoena seeks documents relevant to a subject about which Congress could enact legislation.”The president’s legal team argues that he is constitutionally immune from investigation while in office.”If every committee chairman is going to have this unbounded authority, this court should be the one to say so,” Trump’s lawyers said. “The only pending legislation with possible relevance had already passed the House and failed in the Senate two weeks ago.”Both sides have asked the justices to expedite their decision on whether to consider the merits of the case; it is expected next month. If the justices decline to hear the appeal, “the stay shall terminate automatically” and Mazars would need to immediately surrender the records, the court said Monday.Copyright © 2019, ABC Audio. All rights reserved.

Trump: ‘Very close’ to Supreme Court decision, will announce nominee Saturday
University of California ‘unfairly admitted’ applicants based on connections: Report
‘On the Basis of Sex’ and ‘RBG’ returning to theaters in tribute to Ruth Bader Ginsberg
As nation surpasses 200,000 deaths, Trump keeps downplaying coronavirus
Trump bashes China at UN amid warnings against a world divided by two superpowers
Chelsea Clinton: ‘Unconscionable’ that Trump ‘lied’ to public about COVID-19