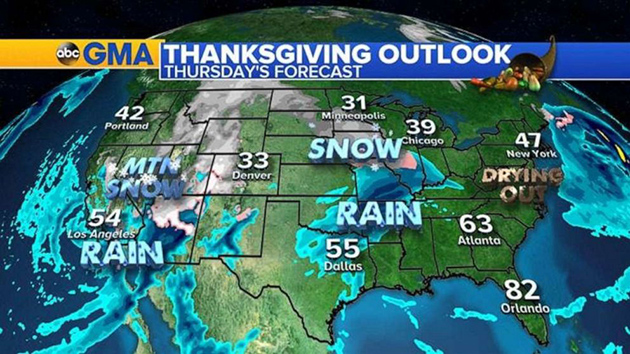 (NEW YORK) — The weather pattern remains unsettled through the week, we are watching several systems that will have impacts on holiday travel from coast to coast.This morning, the northeast is feeling the impacts of the storm that moved through the Midwest and south yesterday.Behind the storm it’s cold enough that the backside of the precipitation is turning to snow – bringing up to 3 inches of snow to Indiana and locally 1 to 2 inches across Ohio yesterday.As the storm has moved into the northeast, precipitation is rain along the coast, but an icy mix just inland and snow for parts of the interior Northeast and New England.Winter weather advisories are in effect today from Pennsylvania to Maine for that frozen precipitation and a few inches of snow.In New Hampshire and Maine a winter storm warning is in place for up to 7 inches of snow through the night.The storm will slowly make its way through the northeast and New England throughout the day, ending mid-afternoon for New York and this evening for Boston.Monday night, a system will slide into the Rockies and eventually make its way to the Midwest and Northeast for the holiday week.Winter storm watches and a few winter storm warnings have been posted for parts of Utah, Colorado, Wyoming, Nebraska and Kansas.Snow will begin in the Rockies and get to Denver by Monday evening. Snow will be significant in the mountains and several inches could fall in the city itself.This system will move out of the Rockies and into the plains and Midwest Tuesday into Wednesday morning bringing a large swath of snow from Colorado to Wisconsin.Rain will also accompany this storm from eastern Texas to Michigan.As this storm moves into the northeast on Wednesday it will be mostly rain.Rain will turn to snow along the backside of the system with gusty winds around the Great Lakes and into interior New England.While one storm moves from the Rockies to the Northeast, we’ll also be watching another significant storm move into the west that is expected to have major impacts on travel.Tuesday, rain and snow will begin in northern California and spread south reaching San Francisco by Tuesday night and Los Angeles by Wednesday morning.Winter storm watches have already been issued for the Sierra and the National Weather Service is saying travel may be impossible as snow levels drop which could lead to numerous road closures Wednesday into Thursday.Several feet is forecast to snow in the mountains. In the lower elevations and along the coast, it will be rain with the possibility of totals reaching 5 inches.Flash flooding could be a concern, especially over the recent burn scars.The stormy pattern continues into the holiday itself with rain and snow across the west and a new batch of rain from Texas to Missouri.Snow will be on the northern side across parts of the Midwest.The northeast will dry out after Wednesday’s storm moves through and conditions will be dry all along the east coast.Copyright © 2019, ABC Radio. All rights reserved.