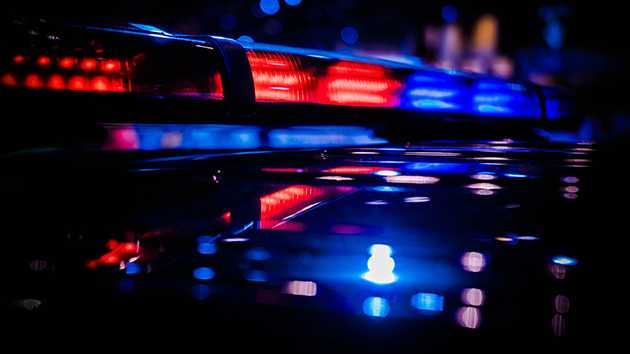 (BALTIMORE) — A Maryland father has been hit with multiple charges after authorities said he physically abused his teenage son and gave the boy, who was having suicidal thoughts, a shotgun.”Just do it,” Anthony Lewis, 46, allegedly said after putting the shotgun into the hands of his 14-year-old son earlier this year, according to court documents obtained by ABC station WMAR in Baltimore.The victim told authorities that on at least three instances, his father beat him with a belt 20 times each, according to WMAR. The teen said his dad strangled him, too.”I saw weird colors in my eyes and it started turning black,” he said of the incident, the station cited the court documents.The alleged incidents happened between Jan. 19 and June 30, according to court documents obtained by the stations. It was not clear on which date the alleged shotgun incident occurred.The victim — who told authorities his father allegedly forced the shotgun into his hands after he admitted to thinking about suicide — was not named by authorities. The child was not injured or wounded in the alleged shotgun incident.A warrant for Lewis’ arrest was issued on Nov. 20. He’s been charged with three felonies and four misdemeanors, including; first-degree assault, second-degree assault, reckless endangerment, child abuse in the 2nd degree, assisted suicide by providing means, firearm use and failure to send a child to school.Lewis is being held without bond at the Jennifer Road Detention Center, according to jail records.According to court documents obtained by WMAR, he waived an attorney at his initial appearance on Nov. 21.His preliminary hearing is scheduled for Dec. 23.If you are struggling with thoughts of suicide or worried about a friend or loved one help is available. Call the National Suicide Prevention Lifeline at 1-800-273-8255 [TALK] – for free, confidential emotional support 24 hours a day, seven days a week.Copyright © 2019, ABC Radio. All rights reserved.

President Trump says he approved TikTok deal with Walmart, Oracle in ‘concept’
Ruth Bader Ginsburg to be honored with statue in Brooklyn, her birthplace: Cuomo
Postal Service’s plan to send masks to Americans allegedly nixed by White House
Shooters open fire on home with two NJ police officers, infant inside
Jimmy Kimmel: Virtual Emmys “will be entertaining” and “you have nothing to do”
‘Cheer’ star Jerry Harris arrested, charged with production of child pornography