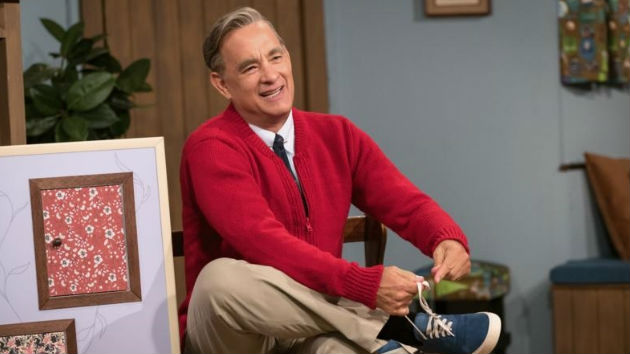 (NEW YORK) — His portrayal is being received warmly by many critics, but the thought of playing Fred Rogers in A Beautiful Day in the Neighborhood left Tom Hanks with cold sweats.

He may have trained like an astronaut in Apollo 13, and shed 55 pounds to portray a stranded FedEx guy in Cast Away, but the idea of buttoning up the beloved kids show host’s red cardigan “was terrifying,” Hanks told Gayle King on CBS This Morning.

“The moment I said ‘yes,’ I began to have the night sweats,” Hanks said.

The two-time Oscar winner explained, “Look, I have played a lot of real people. Fred was a very, very public persona. And everybody has an idea of what Fred is, what Fred was like, the mysteries behind Fred.”

Hanks went on, “The terror that goes along with it is that you want to land in a place that people recognize as his true human behavior, whether you’re playing somebody who’s real, or somebody’s who’s not.”

Hanks struggled to make his portrayal of the soft-spoken man behind the show authentic. “Every person I talked to has said, ‘When you spoke to Fred, you felt like you were only person in the world who mattered to him."”

The film portrays the real-life friendship that developed between Rogers and Tom Junod, a once-jaded Esquire reporter tasked with profiling the PBS icon. The Americans Emmy winner Matthew Rhys co-stars as Junod opposite Hanks.

A Beautiful Day in the Neighborhood is in theaters now.