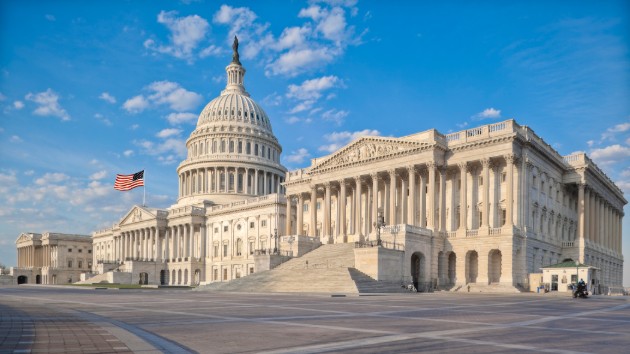 (WASHINGTON) — On Day 5 of the House impeachment hearings, Fiona Hill, former Russia expert for the National Security Council, and David Holmes, political counselor at U.S. embassy in Ukraine, will appear before lawmakers Thursday morning following a day of explosive testimony on Wednesday.In October, Hill described a July 10 White House meeting with Ukrainian officials in which Gordon Sondland, President Donald Trump’s pick for ambassador to the European Union, pressured Ukraine for a political investigation and insisted acting White House chief of staff Mick Mulvaney had agreed to the plan. Following the meeting, Hill said John Bolton, the president’s national security adviser at the time, told her to tell the president’s legal adviser, “that I am not part of whatever drug deal Sondland and Mulvaney are cooking up,” according to a transcript of her closed-door testimony.Last week, on the first day of public testimony, William Taylor, the top U.S. diplomat to Ukraine, told lawmakers about a phone call on July 26 between Sondland and Trump that was apparently overheard by one of Taylor’s staffers, Holmes.On Friday, behind closed doors and under subpoena, Holmes described the phone conversation he said he overheard between the president and Sondland about “the investigations.”Here is how the hearing is unfolding:

8:35 a.m. ABC News’ White House reporter Jordyn Phelps highlights that President Trump is very active on Twitter Thursday morning in blasting the impeachment probe and expressing disbelief that his name has been associated with the “the ugly word, Impeachment.” @realDonaldTrump: “I never in my wildest dreams thought my name would in any way be associated with the ugly word, Impeachment! The calls (Transcripts) were PERFECT, there was NOTHING said that was wrong. No pressure on Ukraine. Great corruption & dishonesty by Schiff on the other side!” This isn’t the first time the president has let on just how much he’s bothered on a personal level by the impeachment inquiry, even as he also simultaneously strikes a defiant tone of confidence that the inquiry is actually helping him politically. Back on Oct. 12, the president said: “I never thought I’d see or hear that word with respect to me — an ugly word, it means so much, it means horrible, horrible crimes and things, I can’t even believe it, it’s a witch hunt.”

8:30 a.m. Both Hill and Holmes have arrived on Capitol Hill. Hill’s opening statement, obtained by ABC News ahead of the hearing, warns of the “fictional narrative” that Ukraine interfered in American elections and not Russia. The consensus among intelligence agencies and congressional investigators is that Russia has sought to interfere in American elections for decades and actively did so in 2016. “The unfortunate truth is that Russia was the foreign power that systematically attacked our democratic institutions in 2016. This is the public conclusion of our intelligence agencies, confirmed in bipartisan Congressional reports. It is beyond dispute, even if some of the underlying details must remain classified,” Hill is expected to say in her opening statement. She’s also expected to blast Republicans and other partisan figures who perpetuate misinformation about Russia, saying political divisions make it harder to combat the problem. “I refuse to be part of an effort to legitimize an alternate narrative that the Ukrainian government is a U.S. adversary, and that Ukraine—not Russia—attacked us in 2016,” Hill will say. Russian President Vladimir Putin expressed relief at an event in Moscow Wednesday, saying “thank God” no one is accusing us of interfering in American elections anymore.

“Thank God, no one is accusing us of interfering in U.S. elections anymore; now they’re accusing Ukraine – well, let them sort it out among themselves. But this factor of the domestic political struggle affects— still negatively affects– Russian-American relations, I hope that this will someday end. We are ready for this,” he said, according to ABC News’ Patrick Reevell in Moscow. Copyright © 2019, ABC Audio. All rights reserved.

America Strong: Teachers across the country go above and beyond as in-person classes return
“Ugh! Don’t do that!” ‘Sopranos’ creator David Chase on how his crew hated series finale set to “Don’t Stop Believin'”
‘Shang-Chi and the Legend of the Ten Rings’ three-peats at #1 with $21 million weekend
Emmys 2021: ‘The Crown’ stars Olivia Colman and Josh O’Connor win for Outstanding Lead Actress/Actor in a Drama Series
Emmys 2021: Ewan McGregor & Kate Winslet win Outstanding Lead Actor and Actress in Limited Series
Emmys 2021: Jason Sudeikis and Jean Smart win Outstanding Actor/Actress in a Comedy Series