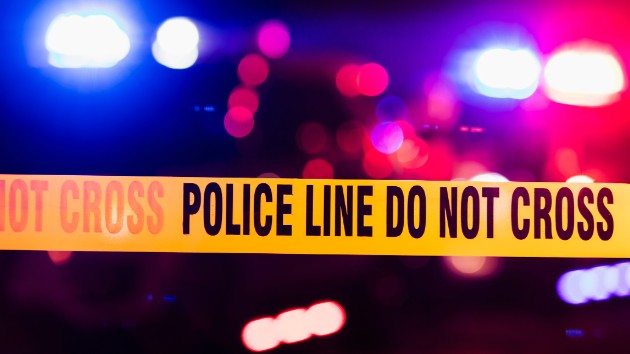 (DETROIT) — A Detroit police officer was killed and another was wounded after responding to a home where a man apparently broke in looking to confront his girlfriend.The officers arrived at the home invasion on the city’s west side Wednesday evening when the suspect opened fire with a high-powered rifle, authorities said. The residents of the home ran out to meet police and informed them the man inside was armed, police said.Police entered the home and cleared the second floor before they came under fire from the ground floor.One officer, an 18-year veteran of the force, died after sustaining a gunshot wound to the neck. The other officer, a three-year veteran, was being treated for a single gunshot wound to the leg. He was listed in serious condition as of late Wednesday.Detroit Police Chief James Craig said the officer’s death marked “a tragic day for the Detroit police family.””Unfortunately, our 18-year veteran succumbed to his injuries. He passed,” Craig told reporters Wednesday night. “Our hearts and prayers go out to his family, certainly, our community and all the officers in the Detroit Police Department. He really is a hero. He fought a good fight.”Investigators said one of the officers managed to return gunfire, striking the suspect. The suspect was able to flee the scene, but officers apprehended him nearby.Craig said the suspect had a “lengthy criminal history,” including previous weapons charges. He said the suspect was recently released from parole.The details of the initial incident are still unclear, but investigators say it appears to have been a domestic situation.”At this point, we don’t believe there’s any additional suspects. What we do believe is that this was a part of a domestic situation,” Craig said. “Preliminarily, I can say that he was looking for his girlfriend. He was angry. We’re not certain if that was her residence, but that’s what we know right now in terms of why he was there and why he was acting in a threatening manner.”The names of the officers and suspect have not been released.The death is the 41st officer to be intentionally shot and killed in the line of duty in 2019, according to the Officer Down Memorial Page. They are the first member of the Detroit Police Department to die in a shooting since Glenn Anthony Doss on Jan. 28, 2018. Copyright © 2019, ABC Audio. All rights reserved.