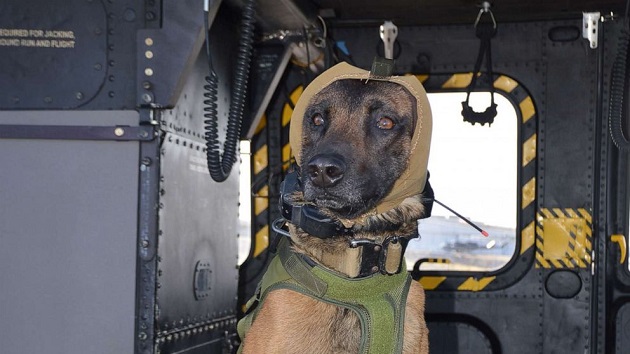 (NEW YORK) — New technology has been developed to protect U.S. military working dogs from temporary and permanent hearing loss that can arise from high-decibel noise in training, transport and operations. An Army small business innovation program provided a grant to Zeteo Tech, Inc., a Maryland-based company, to develop the Canine Auditory Protections System (CAPS) to prevent hearing loss in military working dogs, according to a press release from Army Combat Capabilities Development Command’s Army Research Laboratory.Military working dogs were thrust into the spotlight late last month when a team of U.S. special operators conducted a raid on the compound of ISIS leader Abu Bakr al-Baghdadi in western Syria. A Belgian Malinois chased Baghdadi into a dead-end tunnel where he ultimately detonated a suicide vest, killing himself and two young children as well as injuring the dog. That canine, later identified as Conan, was heralded by the White House and the Pentagon as a hero.The technology has already been successful in tests with military and federal law enforcement working dogs, providing a “significant reduction in short-term hearing loss” for the canines, the Army said.”Even a short helicopter flight can affect a dog’s hearing, resulting in impaired performance and inability to hear the handler’s commands, which can hinder the mission,” said Dr. Stephen Lee, senior scientist at Army Research Office. “This new technology protects the canine while on missions and can extend the dog’s working life.”Current hearing protection for canines was described by the Army as “rigid, cumbersome and hard to put on the dog, with limited effectiveness in testing for the protection of canine hearing.”In contrast, CAPS uses lightweight, high-quality absorption materials to block noise. The final product is also flexible enough to conform to a dog’s head, ensuring “proper sealing around the ear and maximum sound reduction.””The snood-style headgear, resembling a close-fitting hood, uniformly distributes the pressure required to hold the hearing protection in place, while avoiding challenges associated with straps,” the Army said. “At a little more than an inch thick, the device’s low profile will not be a hindrance for dogs working in tight spaces. It is also compatible with other gear used by working dogs, such as goggles.”Zeteo partnered with Pete Scheifele M.D., Ph.D., a retired Navy lieutenant commander, professor at the University of Cincinnati and leading animal audiology expert, according to the Army.Copyright © 2019, ABC Audio. All rights reserved.