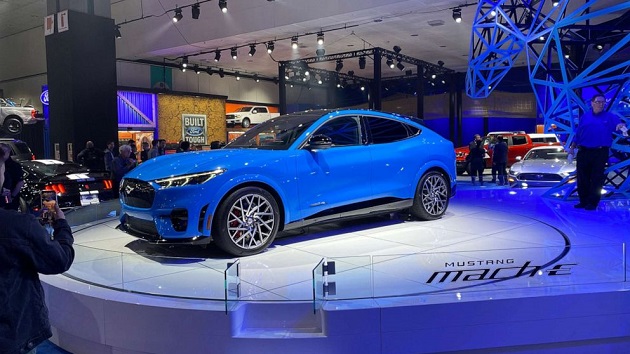 (LOS ANGELES) — Two and a half centuries after Benjamin Franklin famously flew his kite to better understand electricity, the mainstream auto industry is getting on board with the idea of ditching gasoline and going electric.The Los Angeles Auto Show opens to the public this weekend and the prevalence of electric vehicles is one overarching theme among the announcements coming from the biggest names in the industry. Toyota, Hyundai, Volkswagen, Ford and others, including extremely high-end names like Karma, are wading deep into the electric vehicle market, unveiling new products at this year’s show.Ford is showing off its new Mustang Mach-E, which has been praised by some as a true competitor to Tesla. But the Mach-E has been equally criticized on social media for its departure from the look of the traditional Mustang and for being a crossover SUV with the Mustang name.”I think what Ford has done right is realize there’s a lot of equity in the name ‘Ford Mustang,"” said Brian Moody, executive editor at Autotrader. “When you go look at it, you say that’s kind of sharp looking!”At Toyota, all eyes are on the company’s just-revealed 2021 RAV4 Prime — a plug-in hybrid crossover SUV. Less glitzy than sports cars, it’s a real-world vehicle for everyday driving. Toyota says it will have 302 horsepower and will do 0 to 60 mph in 5.8 seconds, the second-fastest in the entire Toyota lineup behind the Supra. Toyota is adding higher-end items to the RAV4 Prime, like optional paddle shifters and vertical LED lights.Toyota also revealed the next-generation Mirai — the hydrogen-powered vehicle that will soon look more like a traditional full-sized sedan.At Volkswagen, the ID Space Vizzion — yes, that’s its name — isn’t yet ready for prime time, but the company is letting reporters sit in the futuristic car and experience an electric vehicle the company says will go 300 miles on a single charge. As VW focuses on an all-electric future, the ID Space Vizzion looks like a spaceship. Its door handles are light bars, there are lights under the front grill and there’s an augmented-reality screen inside.Hyundai revealed its plugin hybrid crossover, the Vision T. The problem for Hyundai though is it’s only a concept car, and Toyota is ready to go to production with its RAV4 Prime in the next few months.On the less attainable side for the average consumer is Karma’s SC2 Vision. Right now it’s a concept car, but the company promises it will be on the market sooner rather than later — for an unknown price.”All the components are there,” said Andreas Thurner, Karma’s vice president of Design and Architecture. “There’s lots of interest already.”Karma has a complicated history. A decade ago, when it was called Fisker, celebrities lined up to get the Fisker Karma electric vehicle. Fisker’s founder walked away and a Chinese company swooped in and bought it — renaming the company after Fisker’s Karma model. Now, Karma Automotive claims its SC2 Vision will have 1,100 horsepower and go 0 to 60 mph in 1.9 seconds.But the biggest wow factor item is its “Drive and Play” feature that Karma said will allow a driver to record a ride and then play it back, like a video game, in their garage when they get home. A projector above the windshield will project the ride like a drive-in movie theater and the car, Karma claimed, will even reproduce the smells around the car on that drive. Karma called it video gaming and driving coming together.Beyond electrification, foreign auto manufacturers are making it known at the L.A. Auto Show that they will not follow Ford’s lead and end production of sedans. In fact, Toyota’s Jack Hollis, group vice president and general manager, said they are going the opposite way.”Toyota is doubling down on our sedans,” said Hollis. “Our competitors are abandoning the segment and now we’re jumping in with all four tires so to speak.”Toyota is unveiling all-wheel drive versions of its sedans, including the Camry, to give SUV-like versatility to customers who want to drive a sedan.”I think getting rid of sedans is a big mistake,” said Moody. “Anybody who says that’s not going to be a significant part of our plan, that’s a mistake.”Toyota told reporters 60% of its sales are light trucks and SUVs. But its sedans remain major sellers. Copyright © 2019, ABC Audio. All rights reserved.