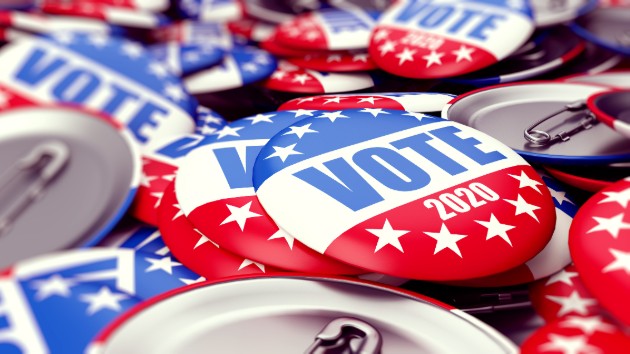 (ATLANTA) — The fifth Democratic primary debate convenes 10 candidates on stage Wednesday night in Georgia, a state trending more purple due in part to shifting demographics, as the splintered field struggles to confront the party’s mounting concerns over defeating President Donald Trump and more Democrats both formally and potentially join the fold. The showdown, one of the last of 2019, comes less than a year before the general election and less than three months before the first primary votes are cast in Iowa, despite a contracting and then expanding field in recent weeks.While the Democrats are readying to spar over kitchen table issues, the candidates continue to grapple with external forces intervening in the contest, ranging from a reordered horse race to the gravitational pull of impeachment hearings in Washington.In the month since the Ohio debate in October, the Hawkeye state’s caucusgoers appear to have crowned a new front-runner, former Massachusetts Gov. Deval Patrick became the newest entrant in the race, former New York City Mayor Michael Bloomberg looms over the field with a likely bid, former President Barack Obama — in a rare foray into the primary — warned against an aggressive push to the left and the House Democrats’ impeachment inquiry has shifted from closed-door meetings to public hearings.For the first time, the roster of this debate, which is co-hosted by MSNBC and the Washington Post and will be held at Tyler Perry Studios in Atlanta — another sign of a diversifying electorate in a once-reliably red state — won’t feature former Texas Rep. Beto O’Rourke, who dropped out of the race, and former Housing and Urban Development Secretary Julián Castro, who failed to qualify.The debate will feature 10 candidates, in podium order, from left to right:

Once again, Biden and Warren will stand shoulder-to-shoulder as the two front-runners clash over two very different ideological visions for the country between her progressive wing and his moderate lane. Yet, both are likely to face increased scrutiny over lingering questions on impeachment for him and health care for her.The former vice president’s debate appearance comes as he contends with being the only person who remains both a Democratic presidential candidate and a central figure in the impeachment inquiry. While he initially stuck to a strategy of laying low on the campaign trail over the weekend, Biden directly confronted the attacks on his family — which sit at the heart of investigation — by keeping the focus on Trump and off his son, Hunter.”Everybody’s account including all the people who testified in his administration and the Ukrainians had said, ‘Biden did a great job for us, did the position in the United States of America as well as Europe and all our allies,"” Biden said at a Las Vegas town hall Saturday night, before laying out the allegation that Trump withheld military aid from Ukraine as leverage to secure an investigation into the Bidens.For her part, Massachusetts’ senior senator takes the stage on the heels of her announcing two proposals to finance “Medicare for All” and outline a transition to a completely government-operated, single payer system.Despite threading calls for big, structural change in her stump speech, Warren’s latest health care plan outlines a gradual path to achieving a full-scale Medicare for All system that would stretch three quarters into her first term in 2023.Some of the harshest criticism aimed at her newest proposals could potentially come from the other senator flanking Biden, Bernie Sanders. The author of the Medicare for All bill in the Senate has already sought to differentiate his candidacy from his fellow liberal stalwart since securing the coveted endorsement of Democratic star, Rep. Alexandria Ocasio-Cortez of New York.Days after Warren released her newest health care plan, Sanders appeared to offer a veiled criticism of her, telling a crowd in Las Vegas that his proposal for Medicare for All is “not so complicated” and “the simplest way to get the universal health care.”But Biden, Warren and Sanders are also faced with another persistent challenge: Buttigieg.Following his more aggressive approach in last month’s face off — in which he called out Warren for having a “plan for everything” except for how to pay for Medicare for All — the small-city mayor has spent the last month cementing his status as a top contender.A new Des Moines/CNN/Mediacom poll out of Iowa shows Buttigieg holding a significant 10-point lead over his Democratic rivals.Now, alongside Biden, Warren and Sanders, Buttigieg might become a key target for the lower-polling candidates who are struggling to make their mark on the electorate.In the last debate, on health care, taxes and jobs, Klobuchar and Gabbard used a more confrontational style to garner applause from the audience and a subsequent bump in the polls.”You are making Republican talking points right now in this room by coming out for a plan that’s going to do that,” Klobuchar said of Warren’s support for Medicare for All, a plan the Minnesotan says will kick nearly 150 million people off their health insurance plans.And both did so with some success: Klobuchar has seen a slight rise in recent polling and Gabbard secured a spot on the debate stage over Castro.But beyond the top-tier, between two other senators and two political outsiders vying for the White House, Booker, Harris, Steyer and Yang are likely to take the stage with renewed urgency to turn a breakout moment into a tangible spike, as the field enters the critical lead-up to February’s early state contests.Regardless, the debate will provide another night of contrast that will further crystalize the differences among the Democratic field, that still counts 17, on policy, philosophy and governing.The debate is slated to air at 9 p.m. EST. The moderators will be MSNBC’s Rachel Maddow, Andrea Mitchell, Kristen Welker and the Washington Post’s Ashley Parker. Copyright © 2019, ABC Audio. All rights reserved.