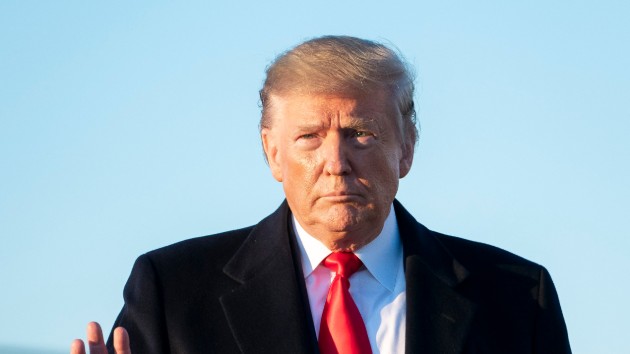 (WASHINGTON) — After President Donald Trump made an unexpected weekend trip to Walter Reed Medical Center for what he called “phase one” of his annual physical, the White House sought to quell speculation about the state of the 73-year-old president’s health with the release of a memorandum from his physician. “Despite some of the speculation, the president has not had any chest pain, nor was he evaluated or treated for any urgent or acute issues,” Dr. Sean Conley said in the memo released Monday night. “Specifically, he did not undergo any specialized cardiac or neurological evaluations.” Conley did not say anything in the memo about the president’s overall health, but called the visit a “routine, planned interim checkup” and said it included a “little more than an hour of examination, labs, and discussion.”White House Press Secretary Stephanie Grisham said in a statement following the checkup that “the president remains healthy and energetic without complaints” and pointed to his “vigorous rally performances” as evidence of his energy levels. Conley did reveal that the president’s cholesterol level is now 165, which is considered within a healthy range — down from 196 earlier this year. The president’s trip to Walter Reed on Saturday stirred speculation in part because of how it differed from typical presidential check-ups. The president’s two previous medical examinations at the military hospital had been announced ahead of time and were listed on his public schedule. On Saturday, the White House didn’t. In fact, reporters were informed about the visit only when the president’s motorcade arrived at the hospital. The president’s doctor said this visit was kept off the record “due to scheduling uncertainties.” A senior administration official also told ABC News that the Saturday check-up had been on the president’s private calendar for several days before it happened. The timing of the president’s exam was also out of step with the president’s standard schedule of annual exams, which typically occur toward the beginning of a new year. The president’s 2019 annual exam was conducted in February — 9 months ago — and his 2018 physical was conducted in January.Conley said a “more comprehensive” examination will occur after the onset of the new year and that the president’s labs and exam results will be incorporated in “next year’s report.” Grisham said the president was getting a head start on his next annual exam in anticipation of a “very busy 2020” by “taking advantage of a free weekend” in Washington, D.C., “to begin portions” of his routine annual physical exam at Walter Reed. The president’s mode of transportation also varied for this visit. While the president typically travels to the military hospital by presidential chopper, on Saturday he traveled by motorcade. Joe Lockhart, press secretary to former President Bill Clinton, was among those who raised questions about whether the president’s visit to Walter Reed was as routine as the White House has said. “Saturday was anything but normal … you shouldn’t believe … Trump went up to Walter Reed for routine blood tests … If @realDonaldTrump trip to the Hispital (sic) was just an exam and bloodwork, all of that could have been done at the White House,” Lockhart said over the weekend in a series of tweets. “In fact most medical procedures can be done at the White House where there is a state of the art medical facility.” Grisham sought to further dispel the speculation that built over the weekend, saying she would not discuss the president’s “security and movement protocols,” and pushing back against those questioning the veracity of her prior statements on the president’s good health. “I’ve given plenty of on the record statements that were truthful and accurate — actively trying to find and report conspiracy theories really needs to stop,” Grisham said. Copyright © 2019, ABC Audio. All rights reserved.