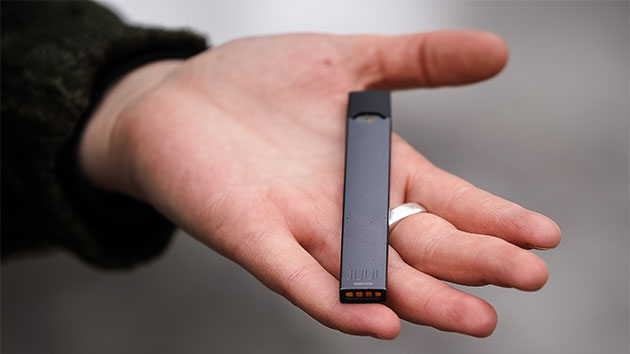 (NEW YORK) — New York Attorney General Letitia James announced a lawsuit against Juul, the e-cigarette company, because of its marketing practices, which she says were geared toward youth. “Juul basically took a page from Big Tobacco’s playbook,” James said Tuesday during a news briefing in New York.The lawsuit, which was filed in Manhattan Supreme Court, alleges that Juul engaged in deceptive marketing practices and illegally sold e-cigarettes to minors on its website and through third-party retail stores. The suit further alleges Juul advertising campaigns failed to warn consumers that Juul e-cigarettes contain nicotine, and falsely marketed them as a safer alternative to traditional cigarettes.In at least one instance, Juul engaged in direct outreach to high school students in New York City, the lawsuit alleges.At present, Juul holds 70% of the e-cigarette market, according to James. There are currently 4.1 million high school students and 1.2 million middle school students who use e-cigarette products.The lawsuit also pointed to Juul’s pervasive social media marketing, including popularizing hashtags like #Vaporized, #JUUL, #LightsCameraVapor and #JUULvapor.A study published this summer in the journal Drug and Alcohol Dependence found that 45% of the Twitters users following the account @JUULvapor were between the ages of 13 and 17. Only 20% of @JUULvapor’s followers were 21 years old or older.James said the death of a 17-year-old boy in the Bronx, which was linked to vaping, cemented her decision to move forward with the lawsuit. It’s not clear whether the teenager used Juul products.Still, James said, “As a result of all of their advertising, a significant number of young people thought that e-cigarettes were safe.””Juul has to take responsibility for their actions,” she added.New York is the third state to file a lawsuit against Juul for marketing to youth. California’s attorney general filed a similar suit on Monday, and North Carolina filed a suit in May. Several other states, including Illinois and Massachusetts, are currently investigating the e-cigarette company.There have been 2,172 lung injuries and 42 deaths linked to vaping, according to the latest count from the Centers for Disease Control and Prevention.