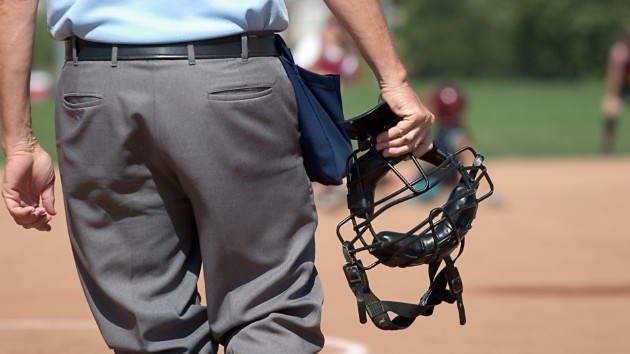 (LAKELAND, Fla.) — A man who punched a little league umpire in the face after he disagreed with one of his calls has been arrested in Florida.Polk County Sheriff’s Office deputies were called to the Highland City Ball Park in Lakeland, Florida last Friday night to reports of the altercation between two men.According to the Polk County Sheriff’s Office, Alberto Escartin Ramos, 22, was at the park to watch his nephew and disagreed with a call the umpire made during the little league game. Once the game concluded, Ramos went to the clubhouse to confront the umpire about it.The situation escalated when Ramos allegedly began screaming at the umpire who promptly asked Ramos to leave the park. Ramos then retaliated by telling the man he would “kick his ass” and proceeded to punch the victim in the face.The victim suffered a cut lip and a broken tooth and was treated at the scene by Polk County Fire Rescue.”This is completely inexcusable — assaulting a little league official while he’s officiating at a game where children are supposed to be having fun, and learning sportsmanlike behavior. Not only was he arrested, he’s also been trespassed from the ballpark,” said Sheriff Grady Judd.Ramos was arrested and charged with one count of felony battery and was released from custody after posting a $1,000 bond.Copyright © 2019, ABC Audio. All rights reserved.