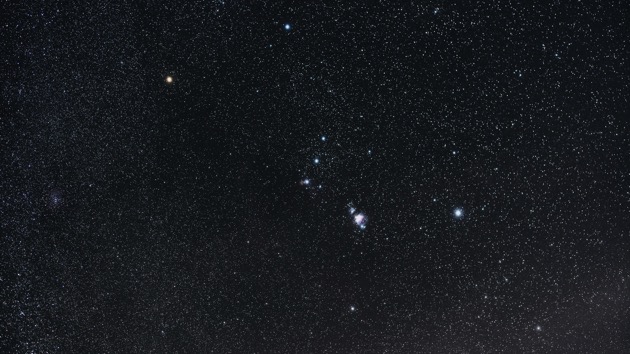 (NEW YORK) — The night sky could light up with hundreds of shooting stars for an hour on Thursday thanks to a spectacular celestial event.The alpha Monocerotid meteor shower is set to be at its peak late Thursday night into the early hours Friday morning with up to 400 meteors per hour, according to the NASA AMES Research Center.This particular meteor shower gets it’s name from the Monoceros constellation which sits southwest of Orion, according to ABC News Baltimore affiliate WMAR.Two meteor scientists Peter Jenniskens and Esko Lyytinenen predicted the latest outburst.Though the alpha Monocerotids are active every year around the same date in November, the last predicted major activity was documented in 1995.People who hope to catch a glimpse of the predicted 30-minute long light show will need to look just above the horizon from east to southeast to see the outburst of meteors above.In order to ensure an optimal view, WMAR suggested star gazers use a telescope or a good pair of binoculars and set up around around 11:15 p.m. to 11:20 p.m. since the peak of the meteor shower is set for around 11:50 p.m.Setting up far enough from bright ambient city lights in a spot that is a bit elevated will also help ensure catching a glimpse of the shower with maximum visibility on the low eastern horizon.Copyright © 2019, ABC Audio. All rights reserved.