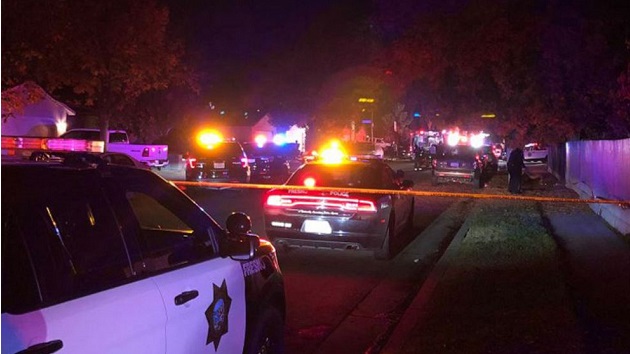 (FRESNO, Calif.) — Four people are dead after 10 individuals were shot in Fresno, California Sunday evening after a family had gathered to watch football, police said.

Three people were found dead in the home’s backyard, while a fourth died at the hospital. A suspect sneaked into the backyard of the home and opened fire on those who had gathered there, according to Fresno Police Lt. Bill Dooley.The shooting took place just before 8 p.m. local time.The victims found in the backyard were between the ages of 25 and 30. No children were injured in the shooting, police said.The shooter was able to escape and police do not know their identity, Dooley said. It is, however, possible the person was known to the victims.Five people were taken to the hospital with non-life threatening injuries, police said. Another person suffered a bullet graze wound.The suspect never entered the home, according to police, where about 35 people were gathered for the viewing party.Dozens of emergency vehicles were on the scene in southeast Fresno, near the city’s airport.The Federal Bureau of Alcohol, Tobacco, Firearms and Explosives (ATF) is sending a team to help investigate the shooting.The Los Angeles Rams played the Chicago Bears in L.A. on Sunday night.